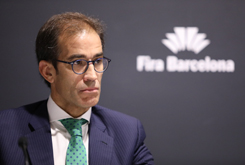 Approval for five new members to join this governing body

Fira de Barcelona’s General Council today approved the appointment of Pau Relat, CEO of the Mat Holding group, as the new president of Governing Board replacing Josep Lluís Bonet, who has headed the institution since 2004. In addition to the appointment of the chairman, approval was given to those of four other members of the governing body, currently made up of nine members.
Thus, in addition to Relat, Mar Alarcón, managing director of SocialCar, Kim Faura, managing director of Telefónica in Catalonia, Helena Guardans, president of Sellbytel, and Manel Vallet, executive vice-president of Catalonia Hotels & Resorts are also incorporated onto the board. The new members replace Núria Basi, Enric Crous, Enrique Lacalle and Carles Vilarrubí, who, now that their terms of office have ended, will no longer form part of the Board of Directors, in which Pedro Fontana, executive vice-president of the Emesa Group, Luis Conde, president of Seeliger y Conde, Miquel Martí, president of Moventia, and Agustí Cordón, managing director of Grupo Zeta remain.
Pau Relat, a graduate in Pharmacy with a master’s degree in Economics and Business Management from the IESE Business School, is the CEO of Mat Holding, an industrial group that is comprised of companies preparing phytosanitary products for crops, agricultural irrigation and water treatment and conduction. He also chairs the international commission of the Barcelona Chamber of Commerce, he has been a member of Fira’s General Council since 2011, as a representative of the entity, and 2018 he has been the chairman of the Organising Committee of the Iwater show.
The new president expressed his appreciation for “Bonet’s excellent work at the head of the institution, which has positioned itself as a benchmark in the European trade fair market, conducting activity with a significant economic and social impact on the city of Barcelona and the territory as a whole”. In this regard, after highlighting the work performed by the Fira workforce, he indicated that he takes on this challenge “with great enthusiasm and with the aim of continuing to promote the institution’s growth, its leadership and its international expansion, as well as its important role as a catalyst for companies, the productive fabric, entrepreneurs and innovation”.
A country project
As for Bonet, he rated his period as the head of Fira de Barcelona as “highly positive” and expressed his “great satisfaction” with finishing his mandate with the best results in the institution’s history, “endorsing the strategy pursued over the years which, with a vision of the future, has enabled it not only to cope during the period of the economic crisis but to emerge reinforced and to expand, increasing its income, its trade fair activity and its presence abroad”. Bonet stressed that Fira is “a country project, the result of the consensus reached by institutions, the business world and society, and a fine example of cooperation between the public and private sectors as a driving force of good initiatives, and that is what it should continue to be”.
In this respect, after offering his gratitude for the support received over the past 14 years, with a particular mention for the institution’s employees and the fairs’ organising committees, he wished all the members of the Governing Board and its new president “good luck and success”, expressing his conviction that “he’ll do a great job at the head of the organisation, enabling it to continue along the path of success and leadership”.
Barcelona, 14 December 2018
Communication Area
Fira de Barcelona
Av. Reina Maria Cristina, s/n
08004 Barcelona
Tel. 93 233 20 00
prensa@firabarcelona.com
Previous
Next