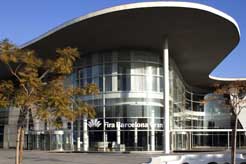 For quality of service the trade fair institution provides exhibitors

For the second time in recent years, Fira de Barcelona has received the Operations Award from the UFI, the Global Association of the Exhibition Industry, for quality attention to exhibitors during assembly.

The UFI Operations Award given to Fira recognises the Barcelona trade fair institution’s Service Quality Management in Exhibition Operations: stand-building and decorating processes, as well as the installation and supply of services (electricity, Internet, wi-fi, etc.) through the design of a new strategy, which eliminated the usual incidents that occur during assembly. The improvements resulted in a 14% increase in exhibitors’ level of satisfaction, as well as productivity.

The award, for which other international trade fair organisations also competed, was presented to Fira de Barcelona representatives at the UFI Gala held in the Dutch city of Utrecht.

In 2010, Fira de Barcelona tied with the Toronto fair to win UFI Operations Award for work on reducing operations costs, freeing resources and reinvesting them to provide better quality service at less cost.