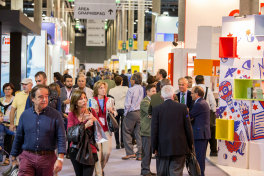 Liber concludes its 34th edition, at Barcelona’s Gran Via Exhibition Centre, leaving a very positive impact. It has demonstrated that the effects of the economic recovery are reflected in the book industry and that the export market continues to be one of the key aspects of the country’s leading cultural industry. Exhibitors have highlighted the optimistic and buoyant atmosphere which has characterised the fair, and the high quality of the contacts established during the event, especially with international buyers, who represented 25% of the total.

Liber is the benchmark sales platform for Spanish-language books. Over the event’s three days, it generates orders and sales leads that account for one third of the publishing industry’s export sales. The Spanish Publishers’ Federation (FGEE) has calculated that during the last quarter of the year negotiations initiated at Liber will account for exports with a value of 120 million euros.
Daniel Fernández, president of the FGEE and of the Organising Committee of Liber expressed his satisfaction with the event: ‘We have progressed from the beginnings of a recovery seen last year, to the clear recovery demonstrated this year, and this has been clearly visible in the levels of activity experienced on stands and in the increased presence of international buyers, especially from Latin America and the USA, markets for which Liber continues to be an industry benchmark’.
This edition of Liber, organised by Fira de Barcelona, has successfully met objectives, attracting nearly 10,000 industry professionals, 25% of them international visitors, from a total of 60 countries, with a particularly strong presence from Latin and North America. Of particular relevance among the professional visitors were 500 buyers and influencers with a specific interest in discovering the offer of the 346 participating exhibitors. These key players in the purchase and distribution of books in export markets were invited directly by the organisers and promoters of the fair.
This edition of Liber has also acted as an indicator of the situation of the Spanish market. The fair attracted a diversity of professional profiles associated with the book industry value chain, who attended to see and buy the latest titles, as well as products and services related to the marketing and distribution of books, e-books, mobile apps, printing and self-publishing.
Professional conference sessions
Over the three days, the participants at Liber have taken part in 85 debate sessions, addressing the challenges confronting the industry, and thereby confirming the event as the leading forum for reflection on the main issues facing the book industry. Issues discussed ranged from marketing in export markets, especially the USA, to free circulation of books between the Ibero-America countries, a proposal that has given rise to the ‘Barcelona Declaration’ signed by the Ibero-American Publishers Group (GIE) Other issues debated included business models for digital content, new distribution formulas, and questions of importance such as the Digital Single Market, which, as the speakers made clear, is a concept which appears not to be based on any studies, but rather to be the result of an arbitrary decision that offers no guarantees to the consumer. Similarly, during the sessions an analysis was made of the possible affects on the book industry of the Transatlantic Trade and Investment Partnership (TTIP), a subject which has created certain controversy due to the lack of transparency imposed by the American negotiating team.
Liber has furthermore served to promote the Bookshop Seal of Quality and to present a similar distinction for scientific and technical publications in order to boost this sector that represents 50 million euros in exports. Other sessions addressed issues related to books for children and young people, and comics, as well as libraries, translation, proof-reading and bibliodiversity.
The closing day of the fair also included an act of support for the industry with the launch of a Comprehensive Plan for the promotion of reading and books in Spain, which will contribute to fostering increased reading habits in the country and to protect the creation, and guarantee the existence, of a basic fabric of book culture throughout the country. This demand, which has been a key feature of this year’s Liber, was also conveyed to the representatives of the various Public Administrations that participated in the fair’s opening act, which was presided over by the President of the Government of Catalonia, Carles Puigdemont.
Liber Awards
One of the most eagerly anticipated elements of the fair was the Liber Awards ceremony. The awards presented by the FGEE offer recognition for the career, and work carried out, by various people and institutions associated with the world of books. Writer Juan Marsé; the founder of Tusquets Editores, Beatriz de Moura; Radio Nacional de España journalist, Pepa Fernández; the film Un día perfecto (A Perfect Day) directed by Fernando León de Aranoa; the Cálamo bookshop of Zaragoza; and the Municipal Library Network of the province of Barcelona were the winners of this year’s awards.
Finally, the commemoration of the fourth centenary of the death of Cervantes is an element which has been present throughout the fair, with many exhibitors displaying works by, or about, the author of Don Quixote. The declaration by UNESCO of Barcelona as a City of Literature has provided the backdrop to several round tables held during the fair.
The next edition of Liber will take place from 4 – 6 October 2017, in Madrid.
Barcelona, 14th October 2016
Communication Area
Fira de Barcelona
Av. Reina Maria Cristina, s/n
08004 Barcelona
Tel. 93 233 20 00
prensa@firabarcelona.com
Previous
Next