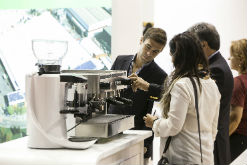 Hostelco 2016 drives the market and boosts networking and knowledge

Hostelco, the International Restaurant, Hotel and Community Equipment Exhibition, is expanding its offering with new sectors and new activities dedicated to spreading knowledge, as well as special programmes aimed at strategic buyers to consolidate business, galvanise the market and encourage networking. Along with the Gastronomic Forum and the Mass Catering Congress, Hostelco will incorporate Barcelona Hosting Week, an initiative which, over the course of four days, will position Barcelona as the capital of the hospitality industry.
From 23 to 26 October, the entire hospitality world will be represented at Fira de Barcelona’s Gran Via Exhibition Centre as part of the second edition of Barcelona Hosting Week which, with some 560 exhibitors (11% more than in 2014), provides a hugely important platform for the food and wine industry and features the sector’s entire value chain, from equipment through to the production and distribution of products.
Hostelco will be showcasing products from 12 different sectors
Hostelco – organised by Fira de Barcelona and the Spanish Federation of Hospitality and Catering Equipment Manufacturers (FELAC) – is taking place for the eighteenth time with the biggest-ever selection of products and services from the leading companies in the sector, 28% of which are from abroad, primarily the United Kingdom, Germany, France, Italy, Belgium, Netherlands, Luxembourg, Turkey and Portugal.
The event will present the latest developments across 12 sectors, with hospitality industry equipment and machinery being the most widely represented. Next come the sectors of cookware and tableware; Management, IT control, and safety and security Textiles and uniforms; Service companies; Furniture and decoration; Equipment and products for laundry, dry cleaning and general cleaning and the Coffee Zone, as well as the new Patisserie, Bakery, Ice Cream and Fitness sections.
Strong presence of strategic buyers
In response to demand from the sector, Hostelco 2016 has concentrated on attracting 2,500 strategic national and international buyers who have already confirmed their attendance. All of them have been targeted directly by the show as being professionals with high decision-making power, such as Spanish and international distributors, equipment importers, installers, sales agents, representatives and experts in technical services from all over Spain, as well as Morocco, Portugal, Italy, Germany, the UK and France, amongst others.
The Spanish distributors, in particular, have had a special programme designed for them, with facilities and incentives to boost their presence at the show. Another important collective is that of purchasing managers from more than 42 Spanish and foreign hotel, restaurant and service management chains, who will meet up with exhibitors at Hostelco through a series of B2B meetings planned by the show’s organisers. There will also be a number of informative technical seminars and round tables at the show. One of these features star chef Martín Berasategui with the managing director of Resuinsa, Félix Marín. Entitled ‘Evolution of the hospitality and culinary sector (1976 – 2016)’, it takes place on 24 October.
La Plaza, the new epicentre of the show’s activities
The burgeoning sectors of bakeries, patisseries and ice creams will be the stars of La Plaza, the new space that will host a full range of activities related to these products. The aim is to show the owners and managers of hotels, cafés and restaurants how to produce these products in-house artisanally and the benefits that come from this process in terms of both profitability and product quality. This section boasts some top-level experts such as pastry chefs David Pallás, Carles Mampel and Jordi Bordas.
Barcelona Hosting Week
Taking place alongside Hostelco will be the Gastronomic Forum, the leading culinary gathering which this time round will be concentrating on the ‘world of desserts’ with contributions from Oriol Balaguer, Christian Escribà, Jordi Butron and Xano Saguer, amongst others. Renowned chefs such as Jordi Cruz, Carme Ruscalleda and the Torres brothers will also be taking part. They will all be conducting workshops and demonstrations to present new trends and techniques to professionals and end users alike. These events will also coincide with the Mass Catering Congress, the only event dedicated to industrial catering which is now in its second edition.
The Spanish market and the strength of its exports are the keys to a changing trend
The 130 companies that make up the Spanish Federation of Hospitality and Catering Equipment Manufacturers (FELAC) achieved an estimated global turnover in excess of 1,424 million euros in 2015, 11% more than in 2014.
Jordi Roure, the president of Hostelco and FELAC, last year confirmed the change in cycle for the sector: ‘The growth in domestic sales, for the second year running since the economic crisis started in 2008, confirms that the domestic market is well on the way to recovery.’ ‘Also,’, he notes, ‘the turnover of Spanish companies has been given a boost by exports that have continued to rise over the last few years and now play a key role in this sector.’
Roure also confirmed that ‘the resurgence of sales of hospitality equipment in Spain has undoubtedly been influenced by the growth of the hospitality sector and the excellent tourism figures.’. With a view to forecasts for 2016, the president pointed out that ‘so far this year, the trend is a positive one, further strengthened by the excellent performance of the hotel and tourism sector.’
Meanwhile, Arantxa Segurado, the show’s director, noted that ‘Hostelco is a key business hub, a forum for debate and a platform of trends and knowledge at the service of a sector of which it is not just a reflection but an active driving force. We are opening this year’s edition in the hope of providing visiting professionals with products and activities that will interest them, inspire them and help them to achieve even greater success.’
Barcelona, 11 October 2016
Communication Area
Fira de Barcelona
Av. Reina Maria Cristina, s/n
08004 Barcelona
Tel. 93 233 20 00
prensa@firabarcelona.com
Previous
Next