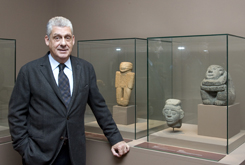 The Board of Directors of Fira de Barcelona has appointed hotelier Jordi Clos as president of B-Travel. Clos, who takes over from Raimon Martínez Fraile, will bring his extensive knowledge and experience of the sector to consolidate the show as the benchmark of experience-related travel.

Clos gave a positive rating to the show’s evolution from the International Tourism Show in Catalonia (SITC) to B-Travel, and says his objectives will be to “promote innovation in the sector and strengthen the trade show’s positioning as an event geared towards travellers’ experiences as a key factor in maximizing their satisfaction.”.

The next edition will take place from 15 to 17 April 2016 at Fira de Barcelona’s Gran Via exhibition centre.