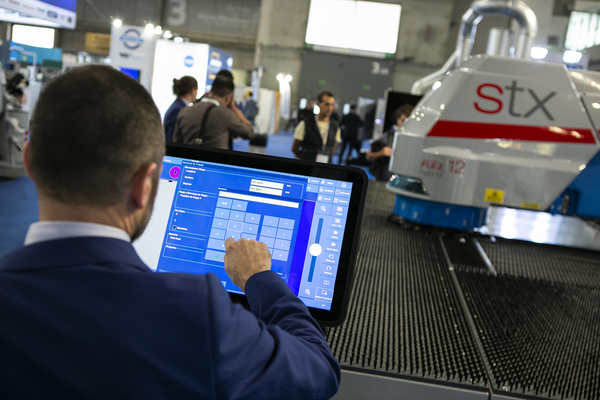 The great reception of the new machine tool area, Healthio Day and In(3d)talks was highlighted

INDUSTRY From Needs to Solutions concluded its fourth edition on Thursday, exhibiting the best applications of advanced manufacturing and responding to the challenges of companies to improve their production both today and in the future. 3D printing, robotics, machine tools and cybersecurity took centre stage in an event that brought together more than 150 companies in its exhibition area and 150 speakers in four simultaneous congresses: Barcelona Cybersecurity Congress, In(3d)talks (additive manufacturing), Max (advanced manufacturing), and Ayri11 (automation and robotics). INDUSTRY, which took place from 29th to 31st October at Fira de Barcelona´s Gran Via venue, received 8,949 visitors.

The new machine tool area, with more than 50 exhibiting companies exhibiting machinery in operation, was one of the areas with the greatest influx of visitors during the three-day event. It was possible to see machines in full performance, including starting, cutting, deformation or other machining techniques. The exhibition area was completed with the automation and robotics areas, new materials, 3D printing, moulds and dies, connectivity and data, and design and services that were also of great interest to visitors.

According to the event’s director, Miquel Serrano, “in this edition, INDUSTRY From Needs to Solutions has confirmed itself as the main platform for industrial solutions on a national level, where the most outstanding current technologies that are revolutionising the industry, such as 3D printing or advanced manufacturing, among others, have been exhibited”.

The congress area included Healthio Day 3D Printing Application in Healthcare, the workshop on 3D printing in the medical field held on Wednesday 30th October, filling the talks where the current situation of bioprinting and the industry were addressed, along with the best cases of application of 3D printing in Catalan hospitals. In(3d)talks, the future lines of the industry were marked and some of the best examples of the implementation of additive manufacturing in areas such as the automotive industry, retail at aeronautics were presented.

Furthermore, the second edition of the Barcelona Cybersecurity Congress focused on cybersecurity in the area of the digital society and connected businesses. Among other topics, the main multicloud solutions, security in medical devices, the protection of industry 4.0 and the prevention of identity theft were discussed. INDUSTRY From Needs to Solutions´ knowledge offer was completed with Max and Ayri11, on advanced manufacturing and automation and robotics, respectively.

The fourth edition of INDUSTRY also featured a B2B European Technology Buyers Programme, which organised more than 50 meetings between European companies and buyers from industries such as the automotive industry, aeronautics, robotics and healthcare, among others.

Organised by Fira de Barcelona, INDUSTRY is sponsored by the Zona Franca Consortium as its main partner, with Leitat, Tecnalia and IAM3DHUB as its strategic collaborating partners.

The next meeting of the advanced manufacturing technology industries will be held from 27th to 29th October 2020.