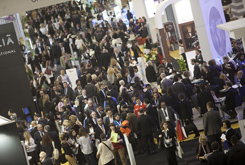 After 12 years in Barcelona, the contract has been renewed for future editions

Tthe world’s leading event for the meetings industry, ibtm world (formerly EIBTM) will be held at Fira de Barcelona until at least 2019. This was announced today by the event’s organizer, Reed Exhibitions, following an agreement to extend the contract that ends in 2016 by a further three years. The show, which opened this morning at the Gran Via venue, showcases the offerings of some 3,000 exhibitors from 150 countries and expects to welcome 15,500 trade professionals.
Reed Exhibitions has renewed its contract with Fira de Barcelona for ibtm world after 12 consecutive years of holding the event in Barcelona, allowing it to remain in the city for another three years after 2016. The event’s director, Graeme Barnett, highlighted “The strong commitment and collaboration of the city and all the organizations involved, such as Fira de Barcelona and the Barcelona Convention Bureau, in helping to establish the show as the leading event in the business travel industry and in guaranteeing a positive experience for all our exhibitors and visitors, combining business and pleasure.”
Barnett also highlighted “The major transformation in the city since ibtm world first moved to Barcelona from Geneva. In this respect, I would highlight the Gran Via exhibition centre, the quality of the hotels and the improvements to infrastructures such as forthcoming opening of the Metro’s Line 9 at Terminal 1 of the airport, the high-speed train and the positioning of the Port of Barcelona as the Mediterranean’s leading cruise-ship port. For all these reasons,” he adds, “Barcelona has become one of the great places in Europe for holding events.”
According to the Fira de Barcelona’s External Business Director, Pere Camprubí, “The renewal of the agreement to host the world’s leading business travel event underlines the excellent teamwork of the last few years and endorses the capacity of both the city and Fira de Barcelona’s facilities and services to attract and host this kind of top-level event.” Camprubí adds: “The continuity of ibtm is great news, not just for our institution but particularly for Barcelona, as one of the leading cities for business tourism, and its projection on the international stage.”
Once again, the show will be exhibiting the latest trends in destinations, products and services for the organization of business travel and incentive events, attended by travel agencies, tour operators, conference and convention centres, hotel chains, service companies and international event organizers.
As well as the new products on show in the trade fair area, the organizers have also set up an Innovation Zone which will showcase the best high-tech solutions and services for organizing events. The show also boasts a comprehensive activity programme featuring more than 100 conferences and seminars given by the leading experts and companies from all over the world.
Barcelona, November 2015
Communication Area
Fira de Barcelona
Av. Reina Maria Cristina, s/n
08004 Barcelona
Tel. 93 233 20 00
prensa@firabarcelona.com
Previous
Next