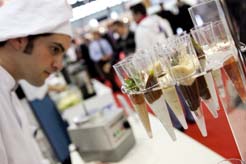 Professional gastronomy is one of the main sectors of demand for hotel and catering equipment, services and products. For this reason, Hostelco and Fòrum Gastronòmic have agreed to be held simultaneously from October 20th to 23rd 2014 in Fira de Barcelona’s Gran Via Exhibition Centre. In this way, the two events will pool resources with the aim of proposing a complete, cross sectional range covering the entire gastronomic value chain, from equipment to product creation, and thereby become a must for the international culinary industry.

The agreement reached between the two organisations will enable them to create one of the gastronomic industry’s biggest platforms in Southern Europe thanks to the distinct complementary nature of the hotel and catering equipment sector and the professional gastronomy industry. Holding the two events simultaneously will increase the opportunities for networking, business and circulation of knowledge among all companies and professionals in the world of gastronomy.

The aim of this alliance is to turn the biennial Hostelco and Fòrum Gastronòmic event into a benchmark for the international gastronomy industry. One of the main goals of both events is to serve as a platform for export, taking advantage of the renowned image of Catalan and Spanish cuisine.

Two events with their own identity
The two shows will complement each other without losing their own personality, maintaining their brands, image and specific organisation. Nonetheless, all common aspects related to promotion, logistics and programming of side events will be coordinated jointly: both events coincide in the profile of trade visitors, who will have the opportunity to participate in the technical seminars organised by Hostelco and the cooking demonstrations and workshops taking place in the Fòrum Gastronòmic.

In odd years, when there is no Hostelco, the Fòrum Gastronòmic will continue to be held in Gerona, as announced at the closure of the last edition held in February.

According to Roure “this agreement places the Hostelco and Fòrum Gastronòmic project among the top European shows with a comprehensive range of exhibits, which go from hotel and catering technology and machinery to creative processes that involve the art of cooking. Behind the chefs and their high capacity for innovation, is a very competitive industry backing them”.

For his part, the co-director of the Fòrum Gastronòmic, Pep Palau, stated, in these circumstances, “the sum of efforts will benefit the hotel and catering sector, gastronomy in general and the country itself”.

About Hostelco:
After 16 editions and over 30 years in existence, Hostelco, organised by Fira de Barcelona with the collaboration of the Federación Española de Asociaciones de Fabricantes de Maquinaria para Hostelería, Colectividades e Industrias Afines, FELAC, is the biggest trade fair of its kind that is held in Spain and the second most important in Europe. Loyal to its commitment to the sector, Hostelco is focused on boosting internationalisation in the market and promoting innovation as a key element of development.

As a platform that not only encompasses a complete commercial exhibition, but also international events such as the Hospitality Industry World Congress (HIWC), the congress that brings to Barcelona the top experts from the international hotel and catering world, Hostelco is currently the only show in Spain and one of the leading events in Europe designed to provide global hotel and catering solutions.

About Fòrum Gastronómic:
Fòrum Gastronòmic was created in 1999 with the aim of providing a meeting point for professional gastronomy. After 11 editions in its 14-year history, it has proved to be a highly efficient promotional tool as well as an element of cohesion of the different wine-gastronomy agents, becoming a model that has set a trend: in 1999, it was already hosting live cooking workshops and, in 2003, was a pioneer in offering tasting sessions in situ.

The wise choice of this initiative has been demonstrated only too well by the success, edition after edition, in its different venues. Moreover, the Forum not only attracts the best chefs in the world but also those young talents who are appearing in the field of gastronomy and to whom the Fòrum has offered the opportunity to become known.