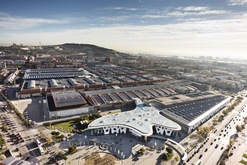 With 195 events, the Catalan capital was, in global terms, the host city for the largest number of congresses, according to the ICCA

The congress-based activity conducted by Fira de Barcelona significantly contributes to Barcelona achieving first place in the 2017 world ranking of international congresses, ahead of Paris and Vienna, which have traditionally led the classification. The city thus rises two places with respect to 2016 and establishes itself as one of the main destinations for organizers of these kinds of events.

Last year, according to the barometer published today by the ICCA (International Congress and Convention Association), Barcelona hosted a total of 195 conferences, while the French and Austrian capitals each organized 190. This leadership of the world ranking of congress-based activity, a position it previously achieved in 2004, highlights the city’s current attractiveness when it comes to organizing and hosting all kinds of international events, although it has always been among the leading cities.
In this regard, Pere Camprubí, Fira de Barcelona’s director of External Business, emphasized the fact that organizers “are committing to the city for their congresses” and underlined, in particular, the role played by the institution, not only in terms of the number of events of this kind that it hosts at its Gran Via and Montjuïc venues, but, above all, their importance and the number of attendees they bring together.
According to Camprubí, this position is the result of a strategy launched by the institution some time ago to attract large international events, especially in the fields of technology and health, areas in which Fira de Barcelona plays a significant role and “constitutes a driving force in the holding of conventions and congresses in the city.”
During 2017, Fira de Barcelona hosted, among other events, the European congresses on cardiology (bringing together 30,000 highly qualified professionals) and gastroenterology (UEG Week), as well as those organized by the ICHNO (devoted to head and neck cancer), SEBBM (biochemistry and molecular biology), ESMRMB (magnetic resonance) and EBA (burns). In the technological field, we should mention the SAP, Atlassian and VM World conventions, as well as World Routes, devoted to air traffic, and the annual congress of the INTA (International Trademark Association).
Major technological and medical events
Throughout 2018, Fira de Barcelona’s sites are also hosting significant congresses on technological and medical subjects, including those organized by Cisco, VM Ware, SAP and Atlassian, as well as the WOC (World Ophthalmology Congress) and the conferences of the European Associations EFORT (Orthopaedics and Traumatology) and EHRA (Heart Rhythm) and that of the ISEV (International Society for Extracellular Vesicles).
These congresses form part of the 140 events scheduled to be held at the institution’s facilities throughout the year, together with the large number of fairs organized by Fira itself and other operators, including the Mobile World Congress, Alimentaria, Hostelco, the IoT Solutions World Congress, the Boat Show, the Smart City Expo and Gastech, to name a just few, as well as several corporate events which, by their very nature, are not included on the ICCA list, as this only includes itinerant shows.
In the 2017 ranking published today by the ICCA, behind Barcelona, Paris and Vienna come Berlin (185 conferences), London (177), Singapore (160) and Madrid (153). By countries, the United States heads the list with 941 congresses, followed by Germany (682) and the United Kingdom (592). Spain occupies the fourth position with 564 events, thus rising from fifth place in 2016, when it hosted 533 congresses.
Based in Amsterdam and dating back 50 years, the ICCA brings together 1,100 companies and organizations specializing in the organization of congresses and events in 100 countries around the world.
Barcelona, 7 May 2018
Communication Area
Fira de Barcelona
Av. Reina Maria Cristina, s/n
08004 Barcelona
Tel. 93 233 20 00
prensa@firabarcelona.com
Previous
Next