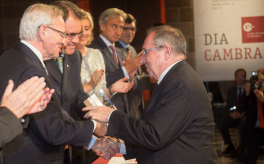 The President of Fira de Barcelona, Josep Lluís Bonet, received the award from the Barcelona Chamber of Commerce which commemorates the 125 years of modern trade fair activity in the city that began with the Universal Exhibition of 1888.
During the ceremony, Josep Lluís Bonet, highlighted the major influence that Fira de Barcelona has had on life in Barcelona and Catalonia and emphasised the institution’s key role as global showcase and instrument of support to Catalonia’s and Barcelona’s industrial and commercial capability:
“Fira is deeply committed to Barcelona and the country, to the companies and society. It supports the productive fabric, small and medium-size enterprises and entrepreneurs, with the aim of creating wealth in the territory, contributing to the recovery of our economy, firmly invested in internationalisation”.
With this award, the Chamber recognises the 125th anniversary of modern trade fair activity in Barcelona that began with the Universal Exhibition and has not ceased since then: in 1920, the first trade fair was held; in 1929 the International Exhibition took place and, in 1932, the institution Fira Internacional de Barcelona was created.
Alongside Fira de Barcelona, a total of 92 companies and institutions received this recognition on occasion of their 50th, 75th, 125th or 150th anniversary. The ceremony, chaired by the President of the Catalan Generalitat, Artur Mas, took place on October 22nd in the Casa Llotja de Mar on occasion of the 17th Día de la Cambra (Chamber Day).
Barcelona, 23rd October 2013
Communication Area
Fira de Barcelona
Av. Reina Maria Cristina, s/n
08004 Barcelona
Tel. 93 233 20 00
prensa@firabarcelona.com
Previous
Next