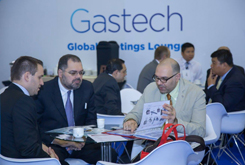 Fira de Barcelona will be hosting the thirtieth edition of Gastech, the largest global gas and liquid natural gas (LNG) event, which will take place on 17-20 September 2018 at the Gran Via exhibition centre. After its last three editions in Asia, the event is coming back to Europe with the support of the country’s leading energy companies. It expects to attract some 600 exhibitors and more than 20,000 sector professionals.
Gastech, held every two years and organised by dmg Global Energy, will enjoy the support at its Spanish edition of Sedigas (the Spanish Gas Association) and the consortium of companies comprising Enagás, Gas Natural-Fenosa and Repsol.
The four-day event, which in 2018 will coincide with the forty-fifth anniversary of its creation in 1972, will bring together the global gas and LNG industry to present innovative solutions, generate business, share ideas and foster new contacts. As well as the exhibition area, with some 600 exhibitors, there will be a noteworthy programme of conferences.
The organisers of Gastech have decided to return to Europe thanks to the recovery of the gas sector on the continent, and have chosen Barcelona for its international profile in terms of its trade show venues and organisational capacity for big events as well as its world-renowned tourist, gastronomical and cultural attractions and excellent transport facilities, hotel capacity and services.
According to the president of Sedigas, Antoni Peris, ‘Hosting the thirtieth edition of Gastech in Spain will be a real pleasure, as it is a very important event for tackling with the challenges affecting the gas and LNG sector. In addition, the recent creation of an organised gas market in Spain – Mibgas – and its determination to become the European hub of LNG heralds a promising future for this industry.’
Meanwhile, the managing director of Fira de Barcelona, Constantí Serrallonga, reiterated ‘the importance of having attracted an exhibition of this calibre and size, in terms of what it represents for the city and its surroundings and for the country’s major companies. It also reinforces the institution’s strategy to continue attracting top-level international events.’
According to Gastech’s forecasts, European imports of LNG will grow in 2017 for the second consecutive year, following a period of decline between 2011 and 2015.
Barcelona, 22 February 2017
Communication Area
Fira de Barcelona
Av. Reina Maria Cristina, s/n
08004 Barcelona
Tel. 93 233 20 29
prensa@firabarcelona.com
Previous
Next