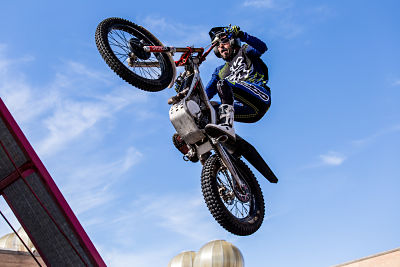 Next December Fira de Barcelona’s Gran Via venue will host the first edition of the Barcelona Motorsport Show: a new trade fair dealing with motorsports, aimed at professionals and fans. Organised by Motorsport2020.cat and Fira de Barcelona, the event wants to become an international benchmark in its field and means to show the hegemony of Barcelona as one of the most outstanding marketplaces.
The show, which will be held on 2-4 December, will cover all motorsport disciplines involving such vehicles as race cars, motorcycles or quads, and is expecting to attract some 50 exhibitors, including top motor vehicle brands, as well as manufacturers of accessories, components, equipment, championship promoters, club representatives, racetracks or schools of mechanics. It is also intended to boost the second-hand market in racing vehicles, and will also have privileged access to the Barcelona-Catalunya Race Track as a test track.
The Barcelona Motorsport Show is an initiative by Motorsport2020.cat, a joint project of CIAC (Cluster of the Automobile Industry of Catalonia), Clustermoto (Cluster for the Progress of the Motorcycle in Catalonia) and INDESCAT (Catalan Cluster of the Sports Industry), the aim of which is promoting the motorsport industry from Catalonia to the world and to connect companies closely linked to this sector.
In the words of the President of CIAC and President of the Barcelona Motorsport Show organising committee, Vicenç Aguilera, “this event intends to reclaim the city of Barcelona as one of the most powerful seats of motorsports in the world and to become a meeting point of professionals and fans at the end of the season in order to prepare the next”. “Barcelona is one of the few capitals in the world that hosts four world championship rounds: Formula 1, MotoGP, RallyCross and WRC, a significant fact, that in addition to Circuit de Barcelona-Catalunya, the automobile industry and Montjuïc, turns our city into a unique venue for the Motorsport Show.“, added Aguilera.
The Director of In-House Business at Fira de Barcelona, Salvador Tasqué, highlighted that “the organisation of this events is part of the institution’s strategy to develop and support industrial events and trade shows – in this case for the automobile industry – and respond to the demands from inside the motorsport industry, which has a long-standing tradition and enjoys huge popularity in this country.“
Among the initiatives carried out at the show are an exclusive market of second-hand race vehicles, with the chance to test them at Circuit de Barcelona-Catalunya, and a motorsports congress. In addition, the show will take place at the same dates and venue as Fira de Barcelona’s Second-Hand Vehicle Trade Show, generating synergies between all motor vehicle users and enthusiasts.
Barcelona, 13 May 2016
Communication Area
Fira de Barcelona
Av. Reina Maria Cristina, s/n
08004 Barcelona
Tel. 93 233 20 00
prensa@firabarcelona.com
Previous
Next