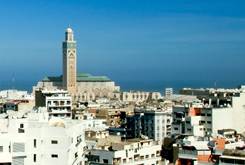 Smart City Expo holds its first African event from May 18 to 19 in the Moroccan city of Casablanca. Jointly organized by Fira de Barcelona and the Casablanca-Settat region, the urban municipality of Casablanca and its prefectural council through Casablanca Events & Animation, this edition of Smart City Expo has a special focus on open, inclusive and innovative cities and will combine a twofold agenda, a Congress for professionals but also for general public aimed at becoming the key urban development event in Northern Africa.

The congress programme features over 80 speakers and moderators and is structured in 4 core themes –Sustainability and Resilience, Mobility and Urban Planning, Collaborative Cities and Citizen Engagement, and Technology and Green Development– including 2 keynotes, 4 plenary sessions and 8 parallel sessions. Conferences will include Boyd Cohen, urban and climate strategist and Entrepreneurship and Sustainability professor/researcher at EADA Business School Barcelona; Carlo Ratti, director of the MIT Senseable City Lab; and Mustapha Bakkoury, president of the Casablanca-Settat Region, Morocco, among the experts who will be speaking.

To foster a new model of social and sustainable urban management and development, Smart City Expo Casablanca also holds activities for the general public that take the smart city concept to the very heart of the city. Under the banner For an open, inclusive and innovative city these activities aim to raise awareness and demystify the concept of the smart city through four free grassroots events: the University in the City expo showcasing several smart initiatives; a public projection of the film Human by Yann Arthus-Bertrand; a four-day free Wi-Fi throughout the city; and a three-day Hackathon to develop new urban apps.

These two axes together with the strategic interest that smart cities have for Morocco have contributed to the concession of the Haut Patronage Royal for Smart City Expo Casablanca from his Highness King Mohammed VI through which his Majesty endorses the event.