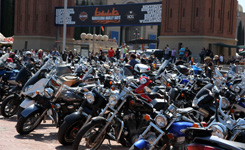 Numerous activities related to the legendary brand are being organized

Barcelona Harley Days, the biggest meeting of Harley fans in Europe, will once again be taking over Fira de Barcelona’s Montjuïc venue between 3 and 5 July. The event features numerous activities for visitors to enjoy the genuine Harley experience in a fun, family-oriented atmosphere.

Some of the top attractions include guided tours, concerts, the Country Party, the traditional custom bikes competition and the hugely popular Flag Parade on a 13-kilometre route through the centre of Barcelona.

As well as activities during the day there will be an exhibition area of over 25,000 square metres showcasing a vast array of motorcycles, components, biker accessories and motorcycling gear. Some 20,000 motorcycles and a million visitors are expected to take part, according to the organizers.

Harley-Davidson, based in Milwaukee (USA) has been manufacturing motorcycles since 1903. The Harley Owners Group has a presence in 119 countries and boasts over a million members of whom 100,000 are in Europe, with around 9,000 in Spain.