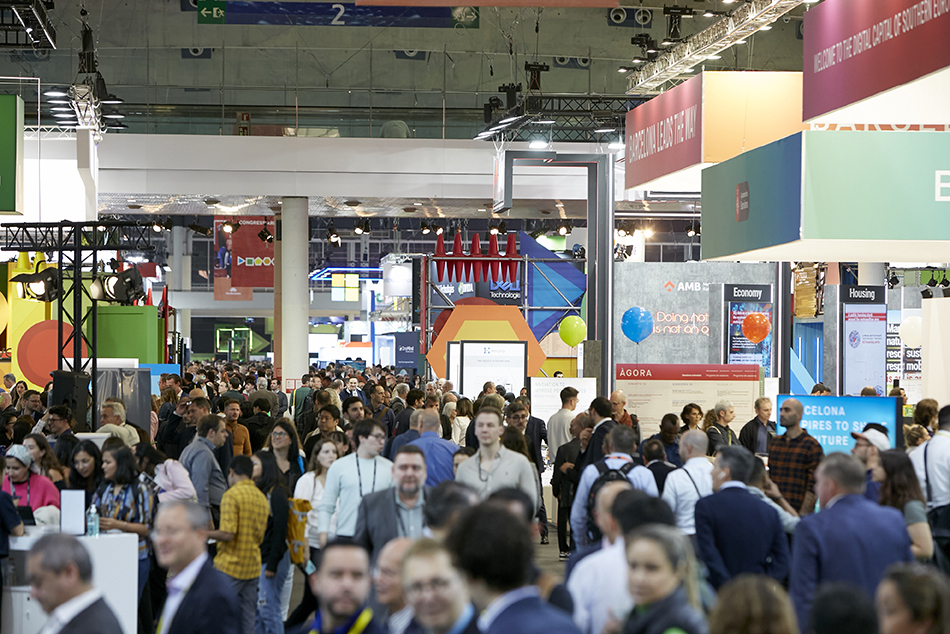 Smart City Expo and Tomorrow.Mobility grow and inspire a new drive to the urban innovation ecosystem

The 2022 editions of Smart City Expo World Congress (SCEWC), the leading international summit on cities and smart urban solutions organized by Fira de Barcelona, and Tomorrow.Mobility World Congress (TMWC), co-organized with EIT Urban Mobility, close this afternoon after inspiring the urban innovation ecosystem and gathering over 700 cities from the five continents, 853 exhibitors and over 400 speakers, more than half of which were women. The events registered significant growth hosting over 20,000 attendees from 134 countries, almost 50% more than in 2021, and bringing the platform to pre-pandemic figures.

SCEWC and TMWC gathered some of the leading experts on urban innovation amongst which were architect Elizabeth Diller, expert on shaping citizens behavior through public urban spaces; Ron Finley, known as the Gangsta Gardener; Hannah Fry Mathematician at the University College London who has been able to decode the patterns of a wide range of social urban activities ranging from shopping and transport to urban crime, riots and terrorism; Kelly Larson, Leading Road Safety & Drowning Prevention work at Bloomberg Philanthropies; and Karen Vancluysen, Secretary General at POLIS.

The event also brought together cities and mayors from the five continents including the Mayor of Kyiv, Vitali Klitschko, who explained how digitization allowed the Ukrainian capital to keep functioning and save lives during the Russian invasion. Among the cities with delegations at the event featured Amsterdam, Atlanta, Barcelona, Berlin, Boston, Brussels, Buenos Aires, Doha, Frankfurt, New York, Paris, Quito, Reykjavik, Rio de Janeiro, Roma, Seoul, Stockholm, Sydney, Tel Aviv, Tokyo and Vienna to name a few.

Together both events hosted a total of 853 exhibitors, an 89% more than in 2021, who showcased their latest projects and solutions. Among these were industry leaders like Accenture, Amazon Web Services, BSM, Cisco, Dell & Nvidia, Deloitte, EDF, FCC Environment, Fiware, Honeywell, Mercedes, Microsoft, Moventia, Smart Ports: Piers of the Future, RACC, Renfe, Sorigué and Volvo.

For the director of SCEWC, Ugo Valenti, “the 2022 edition has given a new drive to the urban transformation ecosystem. After hitting the 8 billion world population milestone, and bearing in mind that more than half live in cities, it is clearer than ever that the fight for a better future has to be a urban fight. The growth experienced this year in attendees, exhibitors and cities is also proof that the urban community is deeply committed to this goal and that Smart City Expo World Congress and Barcelona have become the place where we all convey each year to promote new initiatives and partnerships to reach the common goal of transforming our cities and making them better places for the generations to come.”

Maria Tsavachidis, President of the Advisory Board of TMWC and CEO of EIT Urban Mobility, said “Tomorrow.Mobility brought together thousands of professionals working in the fields of mobility, including large private mobility providers, start-ups, academia, policy makers and city representatives from all over the globe. Demos of innovative products, inspirational speeches, and networking sessions, among others, allowed visitors to learn, get inspired and connect with each other to address critical urban mobility issues. We covered latest research and information regarding global mobility challenges, from active mobility for citizens, with the 15-minute city concept, to the effect the energy crisis has on the sector, and upcoming challenges on urban air mobility and mobility data sharing.”

World Smart City Awards
The city of Seoul was awarded as Smart City of 2022 for its Smart Seoul platform through which the Korean city is actively promoting digital inclusion policies guaranteeing the five basic digital rights – communication, mobility, education, safety, and tech utilization – and providing digital services tailored to the socially vulnerable. Likewise, the city of Kyiv (Ukraine) received a City Award special recognition from the jury for its efforts to use innovation to save lives during the ongoing war.

Chengdu stage
For the first time ever, SCEWC had a second venue during the event. The Chinese city of Chengdu hosted a secondary stage during the first two days of the Congress. A total of 80 speakers took part among which were Liu Xiaoliu, Executive Vice Mayor of Chengdu Municipal People’s Government of China; and Lin Nan, deputy mayor of Chengdu. The Chengdu stage also featured an exhibition zone where several examples of planning, technology and solutions that actively promote smart urban development were showcased.

New horizons and technology
The 2022 editions of SCEWC and TMWC were held together with Tomorrow.Oceans, a new global summit focused on the blue economy, that aims to promote the role of seas and oceans as a source of innovative and sustainable economic wealth, and the second PUZZLE X, an event focusing on frontier technologies that grasps the potential of bleeding-edge tech to build a prosperous future for humanity.

Smart City Expo World Congress will hold its 12th edition from November 7 to 9, 2023.