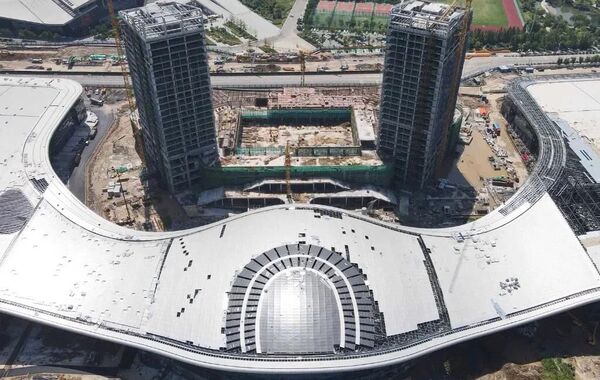 The institution is strengthening its activity in other countries, where it will hold 11 events this year

Fira de Barcelona has taken over the management of two exhibition centres in China, in the cities of Xuzhou and Nanchang, thus reaffirming its strategy of expansion abroad by entering the Asian market, a strategic market for economic reactivation. The two facilities have resumed hosting trade fairs this June, getting back to business after a new pandemic-related shutdown in the country, and plan to host more than 40 events by the end of the year.

Thus, although Fira has previously co-organised a number of events in China and on the Asian continent, it will now be responsible for the commercial, technical, logistical and operational management of venues with a total exhibition area of around 240,000 m², which have been designed as key tools for the economic development of their cities and the region.

The two facilities are back to holding trade fairs after the recent stoppage caused by a new wave of Covid in China and plan to organise around forty events this year. The first of these, the International Motor Trade Fair, held from 2 to 5 June in Nanchang, has joined the restart of fairs throughout the country, with efficient preventive measures.

The 170,000 m² venue this year plans to hold 25 trade fairs, including the Laboratory Equipment and Material Exhibition (August), the National Traditional Chinese Medicine Exhibition and Conference and the International Exhibition of Communications and Electronics Industry (October), as well as the National Education Equipment and Technology Fair, considered one of the most important in China. With a population of more than 5 million people, Nanchang is a city in the southeast of the country with a great agrofood tradition and a growing industry linked to sectors such as automobiles, textiles, chemicals and electronics, among others.

The new Xuzhou venue, which will open at the end of 2021, has 66,000 m² of exhibition space and is expected to grow to 136,000 m² in future phases, and will host around fifteen trade fairs. The most prominent are in the field of new technologies applied to the automotive industry and urban mobility, machine tools, medical equipment and health technologies, and security and emergency equipment, among others. Located in east-central China, Xuzhou has a population of over 8.5 million and is a strategic location with good road and rail connectivity to Henan and Shandong provinces, the port city of Lianyungan and the economic centre of Shanghai.

Ricard Zapatero, Director of International Business at Fira de Barcelona, stressed that “the management of the two international venues consolidates Fira as a relevant player in a strategic market such as China and reaffirms its strategy of promoting foreign action with the aim of offering business opportunities to companies that want to open up new markets. Moreover, we are embarking on this journey at a crucial time when trade fairs are being revived across the country.”

The Greenland-Fira joint venture is also designing a new fairground of more than 100,000 m² in the Chinese city of Shangqiu, which is expected to be operational from 2024. Located in the east of the country, it is a city that has experienced significant growth in recent years with a population of over 7.8 million. It is located at a confluence of major railways, which positions it as an important regional transport hub.

The commitment to overseas activity is also being strengthened with the organisation of eleven trade fairs in various countries around the world in 2022. The external editions of the Smart City Expo World Congress, the world’s leading event on smart cities organised by Fira de Barcelona, and the events co-organised with the Palco Business Group at the Pabexpo venue in Havana, Cuba, are the main protagonists of this strategy.

In addition, new projects are under consideration both for co-organising events and for the management of venues worldwide. For over 10 years, the expansion of Fira’s international business has formed part of its strategy of contributing to the internationalisation of companies and exporting its organisational experience around the world.