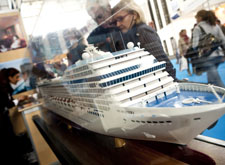 The show for Mediterranean cruise professionals

Seatrade Med, the main event in cruises around the Mediterranean, the world’s second largest cruise destination, will take place from 16 to 18 September. 4,000 sector professionals are expected to attend.

Held in the Gran Via venue, the show will feature products from 200 cruise service providers: from shipping lines, operators and shipyards to companies specialised in sailing, interior design, hotel facilities, leisure options and catering. Hotel managers and heads of tourism, airlines, ports and airports will also be taking part.

In addition to the trade show area, Seatrade Med has a conference programme and networking sessions to analyse the future of a market that is expanding thanks to the increasing popularity of Mediterranean routes. Up until the economic downturn, cruise holidays in Spain grew by over 20% a year. In 2000 only 90,000 Spanish tourists opted for a cruise, whereas the figure in 2010 was close to 700,000.

This show, organised by UBM Live in collaboration with Seatrade Communications Ltd, is the first held in Barcelona, now amongst the leaders of the sector ranking just behind Miami, Port Everglades and Port Canaveral, all of which are in the Caribbean.