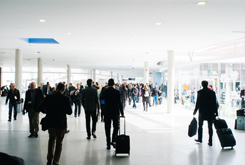 The international summit begins today, with some of the top executives in the industry in attendance

Between today and next Friday, 10 February, Barcelona will be hosting the first Global CEO Summit, the international summit organised by the UFI (The Global Association of the Exhibition Industry) and the company Tfconnect, which brings together around fifty executives from the world’s leading organisers of trade fairs and congresses. Fira de Barcelona, one of Europe’s most important exhibition institutions, is sponsoring an event which aims to highlight the contribution of trade fairs as an economic and social driving force.
The Global CEO Summit, which is the result of the merger of the UFI CEO Forum and Tfconnect’s Gobal Event Summit, will meet at the Hotel W Barcelona, and will be attended by the leaders of trade fair organisations, conference centres and event operators in 30 countries, in addition to Spain, including Australia, Belgium, China, Finland, France, Germany, Greece, Hong Kong, India, Indonesia, Italy, Israel, Kosovo, Libya, the Netherlands, Oman, Poland, Qatar, Russia, Saudi Arabia, Singapore, South Africa, Sweden, Switzerland, Thailand, Turkey, the United Arab Emirates, the United Kingdom and the United States.
The summit includes a comprehensive programme of conferences and sessions to discuss the trends and future challenges in the global events industry, which since 2016 has had its own International Day: in 2017 this will fall on 7 June. This is in recognition of the contribution made by this sector to the economy and society: 31,000 trade fairs are held in the world each year, bringing together more than 260 million visitors and 4.4 million exhibitors, who occupy 124 million square metres, which is equivalent to 30,000 football pitches. The exhibition industry generates an economic impact of 100,000 million Euros and employs 680,000 people according to the UFI.
Meanwhile, Fira de Barcelona, the leading trade fair institution in Spain and a benchmark in Europe, generates an annual economic impact of more than 2,600 million Euros and 40,000 jobs, in addition to creating an important social value. In 2016 it invoiced 165 million euros, the best results in the Fira’s history and held 120 fairs, conventions and Spanish and international corporate events, with a significant proportion of industrial and technological professional events.
Barcelona, 8 February 2017
Communication Area
Fira de Barcelona
Av. Reina Maria Cristina, s/n
08004 Barcelona
Tel. 93 233 20 00
prensa@firabarcelona.com
Previous
Next