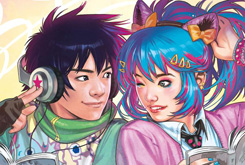 The Manga Fair, which is expected to break previous records, this year focuses on Japanese literature

The giant monsters of manga take over the Montjuïc venue

From 29 October to 1 November, at Fira de Barcelona’s Montjuïc Exhibition Centre, this will be an unmissable event for all fans of Japanese animation and comics. This year’s Barcelona Manga Fair is the largest in the event’s history with 70,000 sq. m of exhibitions, concerts, and activities related to Japanese gastronomy and customs. The stars of this year’s edition of the Fair will be Japanese literature and the giant monsters.
Acclaimed authors including Mitsuyo Kakuta and Banana Yoshimoto will be taking part, as well as the creators of Pokémon, Hidenori Kusaka and Satoshi Yamamoto, and a host of others.
For the first time, this year the show will pay tribute to Japan’s legendary giant monsters, with exhibitions and a battle ring – the very first of its kind in Spain. There will also be an exclusive series of screenings of the very best manga-based non-animated and animated films.
In addition to the usual exhibition area, there is a space devoted to Japanese gastronomy with restaurants and which this year includes the
Japanese confectionery Wagashi, and to traditional Japanese culture, spirituality and natural therapies. There will also, of course, be the stage, with numerous concerts, and zones for cosplayers, exhibitions and game and video game workshops.
The Barcelona Manga Fair is organised by Ficomic.
Barcelona, October 2016
Communication Area
Fira de Barcelona
Av. Reina Maria Cristina, s/n
08004 Barcelona
Tel. 93 233 20 00
prensa@firabarcelona.com
Previous
Next