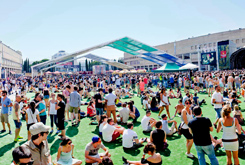 The festival brings together the leading artists in electronic music

Fira de Barcelona is buzzing to the beat of Sónar once again. From 18 to 20 June the venue hosts a new edition of the festival, one of the world’s biggest in electronic music and multimedia art, featuring a plethora of top-level artists.

The daytime programme of Sónar 2015 is mainly in the Montjuïc venue while evening events take place at Gran Via. The big new feature act this year is The Chemical Brothers, who will be giving a world premiere of their new show as well as performing some of their greatest hits.

Other big names this year include Duran Duran, in their first live show in Spain in ten years, Hudson Mohawke and Jamie xx. The festival is also presenting several technology shows with innovative staging.

Hip-hop is huge at Sónar this year with the performance of new rap star A$AP Rocky as well as RL Grime, PXXR GVNG and Grammatik, amongst others.

As well as concerts, the event also features conferences, round tables, workshops and training sessions in the form of Sónar+D to showcase the digital transformation in the creative industries.