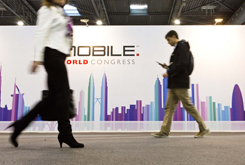 Bringing together over 2,000 exhibitors and 250 top-level speakers

The latest trends in mobile communications will be on show between 2 and 5 March at the Mobile World Congress (MWC), the biggest and most important global meeting for the industry. Now in its tenth year at Fira de Barcelona, the event is expected to beat its previous attendance record.

The Congress, which is held at the Gran Via venue, showcases the latest new products in mobile devices, technologies and services, especially those geared towards the fields of education and learning.

A major attraction this year is the congress programme which features more than 250 speakers, including Sundar Pichai, Google’s vice-president responsible for Android, Facebook founder Mark Zuckerberg (who also attended in 2014), and representatives of companies such as Airtel Africa, Milicom and Telenor Group.

This year the event is expected to bring together over 2,000 exhibitors, 90,000 visitors, 4,000 journalists and analysts and 160 government delegations.

The Mobile World Congress is organized by GSMA, the group of companies that represents some 800 operators from 220 countries, and has an economic impact on Barcelona and its catchment area of around 436 million euros. It forms part of Mobile World Capital and transforms the city into the global hub of mobile communications.