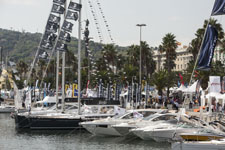 Expoquimia, Boat Show, Hostelco and Smart City Expo are some of the highlights

Once summer is over, trade fair activity resumes in September. The Montjuïc and Gran Via venues will host important trade fairs such as Expoquimia, the Boat Show, Hostelco, EIBTM or Smart City Expo, to name a few.

The calendar kicks off with the European Society of Cardiology Congress, which will bring over 30,000 specialists to Fira; Seatrade Med, the international event on Mediterranean cruises; Seafood, the European Seafood and Seafood processing exhibition; and Expoquimia, Eurosurfas and Equiplast, three events that will transform Barcelona into the Mediterranean capital of applied chemistry.

October will be a busy month for trade fairs. Over 10 trade fairs will be held, among which Caravaning, with the latest in campers and trailers; the Boat Show, showcasing  the latest in Yachting and recreational sailing in Port Vell; and Hostelco, a benchmark event for the hospitality, restaurant and catering equipment industry.

Other major events in autumn include Smart City Expo, on smart cities; EIBTM, on MICE tourism; and a new edition of Denim by Première Vision, on jeans fashion.

Back again for their yearly edition will be the popular Manga trade fair, Liber, Expohogar, Ocasión, Expominer, Auto Retro and the Festival de la Infancia, among others.