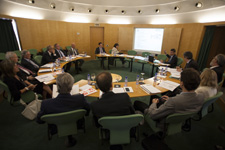 In its regular July meeting, held today, the General Council of Fira de Barcelona made a very positive rating of the progress of the current financial year so far; according to all estimates, the revenue of 120 million euros that was initially forecast will be comfortably exceeded thanks to the results of its major trade shows and, above all, the international congresses organized this year. More than 60 shows and 50 corporate events were held during the last financial year, primarily at the Montjuïc and Gran Via venues.

The Council, chaired by the Mayor of Barcelona, Xavier Trias, stressed the importance of trade fair activities for enterprise, the productive sector and the region as a whole. It also approved the results for 2013, during which revenue of 117.8 million euros was recorded, an increase of 2.2% compared to 2012 and 2.7% compared to 2011, the last comparable year in terms of trade fair events.

The excellent results anticipated for 2014, which it is estimated will surpass those of the period immediately before the start of the financial crisis, are not only due to the major trade fairs and events held this year but, most importantly, to the international congresses, primarily in the field of technology, that have been confirmed throughout the year. In this respect, Josep Lluís Bonet, the president of Fira de Barcelona’s Board of Directors, noted that in 2014 the institution ¿expects to post exceptional results’. After pointing out that some signs of improvement are being observed in the economy and the business climate in general, he underlined the key role of Fira for its capacity to ¿generate economic activities and help companies to internationalize, as well as attracting international business to Barcelona venues’.

Standout international congresses
Some of the trade shows and congresses held during the first half of the year include highly successful editions of the Mobile World Congress and Alimentaria; BizBarcelona; Turismo; Denim by Première Vision, the trade show specializing in denim which used to be held in Paris; Barcelona Bridal Week, organized by Fira from this edition onwards; the first edition of Handmade; and Passenger Terminal Expo, all of which have already taken place, as well as several technology congresses such as the SAP event.

During the second half of the year several other major events will take place, including the European Cardiology Congress, which expects to host more than 30,000 participants; the Barcelona Boat Show in Port Vell; Hostelco, held at the same time as the Barcelona Gastronomic Forum; the Caravanning Show; Expoquimia, Equiplast and Eurosurfas, the benchmark events for the chemical industry in southern Europe; the Smart City Expo World Congress, the international event for smart cities; and EIBTM, the leading business and incentive travel event. Other events include the autumn version of Denim, the Pfizer biomedical sector congresses, and HP Discover, VMworld Europe and Microsoft in the field of technology.

Another important landmark in 2014 has been the agreement to host, starting next year, the winter edition of the urban and contemporary fashion show Bread & Butter, which returns to Fira de Barcelona where it originated and consolidated itself over the course of eight editions held between 2005 and 2009.

Fira’s overseas activities are also booming, with the organization of Alimentaria Mexico and Alimentaria Lisbon, the Smart City Expo events in Kyoto and Montreal, the participation of Construmat in the Ficons trade fair in Recife, Brazil, and the joint organization of the Motor Show and Doha Jewellery and Watches Exhibition in Qatar, amongst other activities such as the provision of consultancy services to various trade show venues and organizers and other upcoming projects.