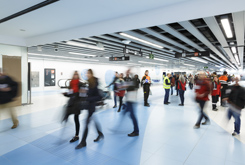 The Metro runs between the airport and Fira de Barcelona

The section of Line 9 of the Barcelona Metro between the airport and Zona Universitaria goes into service on Friday 12 February. With this new infrastructure, Fira de Barcelona’s Gran Via venue now has a key connection with the city centre and airport terminals 1 and 2.
Along its 20 km length, the southern section of Line 9 has 15 stations, linking the municipalities of Barcelona, L’Hospitalet and El Prat de Llobregat, providing public transport to schools, shopping areas and logistics and business parks, including the City of Justice, Mercabarna and Fira de Barcelona, which will have two stations within the Gran Via venue.
This new section involved an investment of 2,899 million euros and connects the Zona Universitaria station in the city centre with the airport in just 32 minutes. Trains will run every 7 minutes in each direction, dropping to every 4 minutes between certain stations when there are events that generate mass public transit. In terms of length it is similar to that of Line 1, the longest in the Metro network, and is expected to carry some 23 million passengers per year.
The southern section of L9 goes into service just before the start of the Mobile World Congress on 22-25 February, the global mobile communications event held every year at the Gran Via venue.
Further information
Barcelona, 11 February 2016
Communication Area
Fira de Barcelona
Av. Reina Maria Cristina, s/n
08004 Barcelona
Tel. 93 233 20 00
prensa@firabarcelona.com
Previous
Next