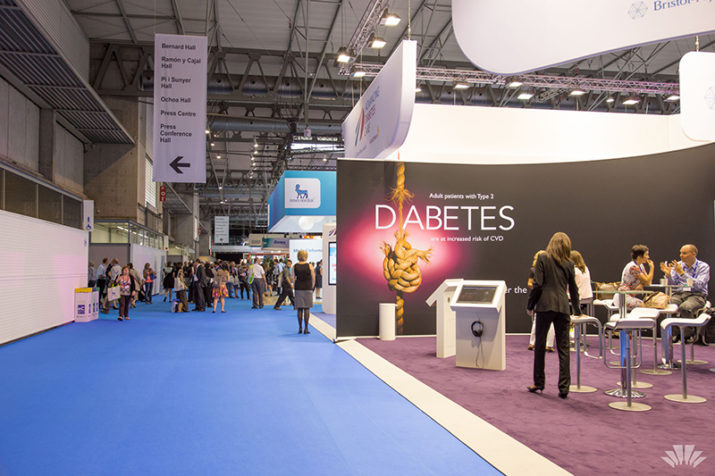 More than 15,000 experts are expected to attend the European Diabetes Meeting's third edition at Fira

The Annual European Association for the Study of Diabetes (EASD) meeting presents the latest developments in the research and the treatment of the disease, which causes 1.5 million deaths worldwide each year. This landmark medical event returns to Fira Barcelona from 16th to 20th September with a total of 15,000 international experts.

The most important annual conference on the study of diabetes returns to Fira Barcelona after holding two past editions here, in 1998 and 2013. The scientific programme of the meeting, selected by a committee of experts, deals with aspects such as the use of technology in the study of diabetes, the impact of the disease on quality of life and the relevance of factors such as genetics and nutrition.
The 55th edition of the meeting aims to promote and support diabetes research, contribute to the rapid dissemination of new studies on the disease and facilitate the application of new techniques and discoveries.
The significant increase in cases of hyperglycaemia in recent years makes diabetes the focus of current medical debate. According to World Health Organization data, the number of cases of diabetes has quadrupled since 1990, and it now affects 422 million people worldwide, causing 1.5 million deaths each year.
Barcelona, September 2019
Communication Area
Fira de Barcelona
Av. Reina Maria Cristina, s/n
08004 Barcelona
Tel. 93 233 20 00
prensa@firabarcelona.com
Previous
Next