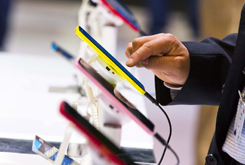 Mobile World Congress brings together some 2,100 exhibitors and 95,000 visitors

The biggest mobile communications show in the world

Everything’s ready for the new edition of the Mobile World Congress, the world’s most important event for the mobile communications industry. The show takes place between 22 and 25 February at Fira de Barcelona’s Gran Via venue, and this year coincides with the opening of the new section of the Metro’s Line 9. Once again, the show expects to break all records.
It expects to host some 2,100 exhibitors, 95,000 trade visitors, over 160 government delegations and 4,000 journalists and analysts. Under the slogan “Mobile is everything”, the Congress will feature all the latest trends in mobile technology, devices and services.
A standout feature of this year’s congress programme is the participation of top-level speakers such as the founder of Facebook, Mark Zuckerberg (who also presented in 2014 and 2015); the president; Qualcomm, Derek Aberle, who will be accompanied by Formula 1 driver Lewis Hamilton; and the CEO of Ford, Mark Fields, amongst others.
The Mobile World Congress, organized by GSMA – the association that represents the interests of around 800 mobile operators worldwide – expects to have an economic impact on Barcelona and its surrounding area of over 460 million euros and create 13,000 temporary jobs.
An exciting new feature this year is the start-up of the new section of Line 9 of the Barcelona Metro, connecting the airport and the city via the Gran Via venue.
On the same dates as the Congress, the third edition of 4 Years From Now (4YFN) takes place at the Montjuïc venue, specializing in mobile technology start-ups, which is also organized by GSMA in conjunction with Mobile World Capital Barcelona.
Barcelona, January 2016
Communication Area
Fira de Barcelona
Av. Reina Maria Cristina, s/n
08004 Barcelona
Tel. 93 233 20 00
prensa@firabarcelona.com
Previous
Next