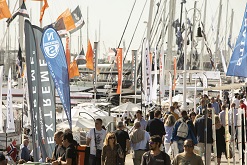 The 57th Barcelona International Boat Show, which closes its gates today, has been characterized by a general mood of optimism among exhibitors and visitors. The extensive commercial activity, the hundreds of business contacts established, the new products presented and the number of enthusiasts who have flocked to the Moll de la Fusta and the Moll d’Espanya docks at Port Vell have made it one of the most successful shows in recent years.
Organised by Fira de Barcelona in partnership with the ANEN (National Association of Nautical Companies), this year’s show has focused on innovation, sustainability and entrepreneurship, consolidating the event as the largest commercial and promotional platform for recreational boating in Spain and one of the most important in Europe.
With 275 exhibitors and 700 boats (171 on the water), the Show grew by 8% overall in 2018. In this regard, Luis Conde, the Boat Show President, said that “a very high percentage of the annual sales in the Spanish boat market are complete over the course of these five days”, positioning the Fira de Barcelona event as “the best fair in the sector in our country, thus contributing to the recovery that Spanish boat companies have achieved in recent months”.
The show presented 120 new products, including two hybrid boats and a catamaran with an electric engine, displayed ten boats nominated for Best European Boat of the Year, accumulated more than 180 business contacts at the second Professional Meetings and held a competition for 35 startups at the first Nautic Tech International Investment Forum, during which the scheme of the Catalan firm Thermal Recycling of Composites to recycle boats made of glass and carbon fibre won first prize.
Jordi Freixas, the director of the Boat Show, believes that “the excellent response from companies in the sector and the general public mean we must follow this course at future shows so as to try to continue to meet their needs”. Freixas states that “our goal for 2019 is for the Show to have more on display, more business and more activities to introduce sailing to all kinds of audiences”.
The Show conducted around a hundred activities this year, including the 4th Paddle Surfing Festival, the Barcelona Paddle Race, trips on aquabikes, launches of light sailing boats at sea, Traditional Sailing workshops and Nautical Night, among many others. With just a few hours to go before it closes, the Boat Show expects to have welcomed 56,000 visitors, the largest contingents being from France, Germany, Italy and the United Kingdom.
Barcelona, 14 October 2018
Communication Area
Fira de Barcelona
Av. Reina Maria Cristina, s/n
08004 Barcelona
Tel. 93 233 20 00
prensa@firabarcelona.com
Previous
Next