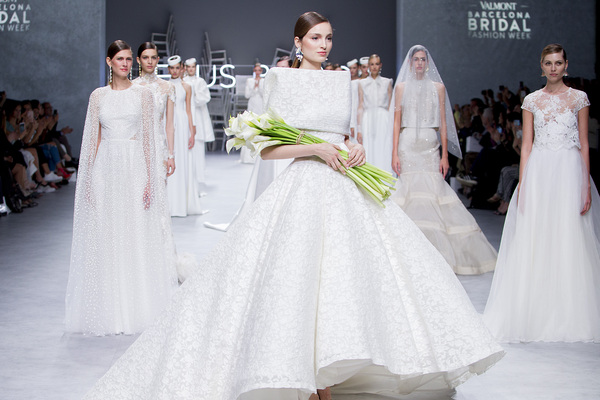 The VBBFW (Valmont Barcelona Bridal Fashion Week) catwalk will turn on the spotlights between 21st and 24th April to present more than 900 outfits designed by the major national and international bridal wear fashion brands. 35 leading firms have already confirmed their attendance at the event’s fashion shows that they’ve chosen to present their new collections, with designers participating for the first time such as the Italy based, Peter Langner, and Jenny Packham, from Great Britain.

The VBBFW parade will be the setting for the launch of their new proposals of 35 national and international firms, which will present their 2021 collections for brides and grooms and evening wear to operators from the bridal industry, buyers and communication professionals from all over the world.

Many local firms have alrady confirmed their participation, such as Jesús Peiró, María Salas, Sedomir Rodríguez de la Sierra, Fely Campo, Yolancris, St. Patrick, Isabel Sanchis, Inmaculada García, Sophie et Voilà, Isabel Zapardiez, Beba’s, Marco & María, Ramón Sanjurjo, Carla Ruiz, Sonia Peña and Rosa Clará will also be showcased at the VBBFW parade which, on Friday evening, will be turned into the main stage for the celebration of the event’s 25th anniversary. The Pronovias Group, which will take part in the fashion shows with the new proposals from the St. Patrick brand, will display another collection resulting from its partnership with an internationally firm whose name the company will soon announce.

In addition, confirming its commitment to young designers, the VBBFW parade will host the New Talents fashion show with the creations of Spanish designers, Mireia Balaguer, Paola Carolina and Olga Maciá and Italy’s Simone Marulli and Poesie Sposa.

The participating international brands will include for the first time the Italy-based designer, Peter Langner, Jenny Packham from Great Britain, and Vestal from South Korea, and others who repeat their presence as French company Cymbeline, American firms Justin Alexander, Maggie Sottero and Demetrios, Julia Kontogruni from Bulgaria, The Atelier, the Malaysian firm managed by Jimmy Choo, Marylise & Rembo Styling from Belgium and Flora from Israel.

The name of the protagonist of Barcelona Bridal Night will be revealed in the coming weeks, as well as the other designers and brands that will attend VBBFW, the event that has established itself as the international benchmark in its speciality.

Trade fair, international bridal fashion business center
The trade fair will coincide with the parade on 24th April, when it will open its doors, and last until 26th April. According to forecasts, this year’s exhibition will feature more than 430 firms, 74% of them being international ones visiting from 34 countries. Valmont Barcelona Bridal Fashion Week, organised by Fira de Barcelona, expect to attract more than 23,000 visitors, mostly entrepreneurs, retailers and distributors, from around one hundred countries, and about 1,500 strategic buyers from Italy, Germany, the UK, France, the USA, Japan, China, Canada, Mexico, Brazil, Korea, Australia and the United Arab Emirates, all focus countries for the trade fair which have been contacted directly by the organisation.