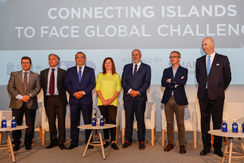 Great success in participation for the second edition of the leading world congress on smart islands. Over the course of two days, the event brought together 95 national and international speakers, as well as institutional representatives from over one hundred islands all around the world, such as Zanzibar (Mauritania), Paros, Milos or Tilos (Greece), Wight and Orkney (United Kingdom), Bahrain, Cozumel (Mexico), or Port Louis (Mauritius), among others.
The second edition of the Smart Island World Congress, organized by Fira de Barcelona with the support of the Government of the Balearic Islands, the Council of Majorca and the Town Council of Calvià, comes to a close this afternoon. A great success in terms of participation, the event has been confirmed as a central forum for debate among islands and a point of reference for strengthening relations between them.
The gathering brought together over 1,200 professionals and 175 international delegations from over 100 islands. Also worth noting is the participation of several important international associations, such as Dafni, which brings together over 44 island municipalities of Greece; Coe, representing some of the smaller islands in the Caribbean; or Global Island Partnership, representing over 30 islands. Along these lines, within the framework of the Island2Island B2B platform, over 150 meetings have been held between companies and delegations.
Over the course of the summit, 15 lectures structured the debate on the challenges and opportunities islands all around the world face every day, such as climate change, economic competitiveness, technological innovation and tourism.
The conferences given by the main speakers, Mónica Araya, director of Costa Rica Limpia (Clean Costa Rica) and promoter of the decarbonization of the Central American country and Doug Lansky, consultant and promoter of tourist decongestion, sparked great interest among those present. The same can be said of the presentations by Christopher Jones, General Directer of Energy for the European Commission, and José María Lassalle, Spanish Secretary of State for the Information Society and the Digital Agenda.
Wight, Smart Island 2018 winner
The evening of 23 April, the Smart Island awards named the Isle of Wight (England) the Intelligent Island of the year. The Mexican island of Cozumel was named best Smart Destination and the city of La Possession, part of Réunion island, was awarded best Sustainable Development initiative.
Calvià, 24 April 2018
Communication Area
Fira de Barcelona
Av. Reina Maria Cristina, s/n
08004 Barcelona
Tel. 93 233 20 00
prensa@firabarcelona.com
Previous
Next