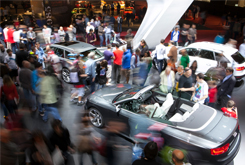 The Barcelona International Motor Show (SIAB) is being held for the 38thtime this May with 96 years of history behind it. Once again, the event aims to provide a unique showcase for automotive brands, a boost for sales, a platform for the industry and an international trade show of reference in terms of technological innovations. With this objective, the show will be hosting four main areas: Brands, in which firms will showcase their new products; Connected Car; Urban Mobility; and Sketch Car Design.

The show’s president, Enrique Lacalle, thanked the brands that have already confirmed their attendance and urged everyone who is still undecided to come on board this great international show which is now approaching its centenary. This is a time of expansion in the sector in the country that is the second biggest motor vehicle manufacturer in Europe, and the show will feature some exciting new models and great incentives for visitors. Lacalle finished by expressing his great appreciation for the support of the Minister of Industry, José Manuel Soria, in the hope that the International Motor Show will also reflect the encouraging situation of the Spanish economy.

As an industrial platform and a summit for the motor vehicle industry in Spain, the show, which enjoys the support of ANFAC and ANIACAM, will provide a setting for top executives and representatives in the sector to discuss the latest advances and future challenges. For this reason, the show will be putting an emphasis on the role of mobile technologies by hosting a space entitled Connected Car, featuring the innovations in this field that experts regard as key to the future of the automotive industry.

According to a recent study by German firm SAP, in 2016 there will be 210 million connected cars around the world, and the car will become the fourth most widely used screen after the TV, computers and mobile devices (smartphones and tablets). According to consultancy company Accenture, car-embedded technology is now a more important selling point than vehicle performance for 66% of buyers.

Another of the new areas at the show is directly related to innovation, in this case focusing on how we use our vehicles. Urban Mobility will analyse the different types of vehicles and fleets available today and how technology implemented in driving and control systems will change the way we move around in cities.

Finally, the Sketch Car Design area, which enjoys the support of SEAT amongst other brands, will explain to visitors the design process of a motor vehicle, focusing on how the idea for a new car emerges from the designer’s mind. To do so, the space will feature live demonstrations of how designers rough out the first outlines of a vehicle and how these sketches are turned initially into a prototype sculpted in clay and finally the genuine article. The space will look back over the big names and creations of some of the most famous vehicles chassis in history.

Organized by Fira de Barcelona, the SIAB – the only motor show in Spain to enjoy the international recognition of the OICA (International Organization of Motor Vehicle Manufacturers) – will be held for the thirty-eighth time between 9 and 17 May at the Montjuïc Exhibition Centre, coinciding with the Spanish Formula 1 Grand Prix which will transform the city into the world’s motor capital for a few days.