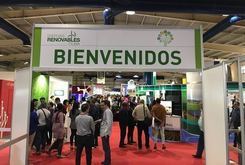 The Securtec and Energías Renovables halls closed their first editions in the Pabexpo show ground in Havana to widespread approval among visitors. The two halls, organised by Fira de Barcelona and a local partner, the Palco Business Group, with the support of 5 ministries from the Republic of Cuba, provided fresh opportunities for business and development to the 76 participating companies, representing the sectors of alternative, energies, urban security, and emergency services.
Within the framework of the Energías Renovables hall, the Sustainable Energy Forum, organised jointly between the Cuban Ministry for Energy and Mines and the European Union, with the aim of promoting the development and promotion of alternative energies on the island, featured the participation of 60 speakers, and brought together over 300 people over the 30th and 31st of January.
For their part, the professional meetings (workshops, business rounds and investment forums) organised by both Securtec and Energías Renovables, proved very popular with the visitors. In total, 300 meetings between over 70 official importer companies were recorded. Also worth highlighting was the participation of 25 local specialists and 15 foreign investors attracted by the huge investment opportunities which Cuba provides.
Securtec and Energías Renovables received a total of 2,500 visitors from 30 countries, over the three days the halls were open. Furthermore, the halls brought together 76 exhibiting companies (42 in Energías Renovables and 34 in Securtec), 9 of which were Spanish, representing 12% of the total. They also came from countries such as Belgium, the United States, Peru, China and Italy, among others.
According to the Director of Fira International, Ricard Zapatero, “Securtec and Energías Renovables have shown the huge interest in Cuba from international companies, as a huge generator of business opportunities”. Furthermore, Zapatero stressed that “the holding of these events is helping to position Havana as a permanent headquarters for business meetings for the entire Caribbean region”.
Fira de Barcelona in Cuba
Energías Renovables and Securtec are the fifth and sixth fairs co-organised by Fira de Barcelona and its local partner, the Palco Business Group, since 2016. The next events will be in April, with Fecons, the Cuban construction fair, and Salud para Todos, an international convention on health, for which Fira de Barcelona will deal with internationalisation. Subsequently there will be the second edition of Alimentos Cuba, a fair dedicated to food, drink and food technology.
Barcelona, 9 February 2018
Communication Area
Fira de Barcelona
Av. Reina Maria Cristina, s/n
08004 Barcelona
Tel. 93 233 20 00
prensa@firabarcelona.com
Previous
Next