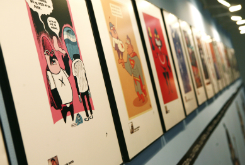 The Barcelona International Comic Show, one of the biggest in its specialist area, is back on 16-19 April at the Montjuïc venue with new and exciting stories! The heroes of science fiction and fantasy comics are the big stars of this year’s edition.

Two standout exhibitions include one on the Joker, Batman’s great antagonist, and another on Captain America, the historic leader of the Avengers, to mark the 75th anniversary of these two characters.

The show, organized by Ficomic, also plays host to numerous recreational and cultural activities related to the world of comic books, including conferences, round tables, presentations, signing sessions by Spanish and international authors, a themed children’s area with Doraemon and Cosplay competitions dedicated to superheroes and the fantasy genre.