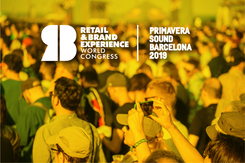 One of the most recognised music festivals in the world, Primavera Sound, and the new Fira de Barcelona event, the Retail & Brand Experience World Congress, join forces. The music promoter will be responsible for holding the welcome party for those attending the congress at the fair, and will bring Radio Primavera Sounds (RPS) to the event, while RBEWC will take part in the programme of conferences of the festival to discuss the role of music in the world of branding and retail.

Four days before the start of Primavera Sound, the attendees of the congress of the new Fira fair RBEWC will be able to get a foretaste of the show. Thus, the Barcelona international independent music festival will organise the welcome reception for the attendees of the congress that will take place at the cultural centre Abaixadors10 located in the heart of the El Born neighbourhood, with live music and DJ sets.
Primavera Sound will also play a key role in the second day of the fair; as soon as the last presentation of the day ends, the official Retail & Brand Experience World Congress will begin and the auditorium of the start-up area will be converted into a meeting and leisure space, with ambient music, art and lighting. Similarly, and during the three days of the fair, the radio station of the festival will move part of its activity to the Gran Via venue from where several DJs from the radio station will liven up the space with their music and share specific contents of the event.
The agreement also includes RBEWC’s participation in the programme of conferences of Primavera Pro, the international meeting aimed at professionals in the music industry that has become internationally prominent. There will be a round table at the fair, where the future of retail and the close relationship between music and branding will be discussed.
Fira de Barcelona’s Business Director, Salvador Tasqué, points out “the importance of the agreement between two events that commit to innovation as a path to development. With this collaboration we want to strengthen the links between retail and musical culture, a space where brands have always found their great ally when defining and promoting themselves”. Likewise, “the coming together of the two events further reinforces Barcelona’s leading position as a city at the forefront of innovation”.
The future of retail, up for debate
The first Retail & Brand Experience will take place from 27 to 29 May in the Gran Via venue and will see the participation of over one hundred speakers, directors and executives from companies such as Google, Ikea, Nestlé, British Airways, Alibaba, Glovo, Carrefour and Levi Strauss who will share their experiences and discuss the main present and future challenges of retail in the more than 90 scheduled presentations. The event will also have an exhibition area with 100 companies, a Start-up area that will bring together more than 75 exhibitors from around the world, a competition for the best emerging proposals, as well as conferences and workshops for entrepreneurs.
Barcelona, 4 April 2019
Communication Area
Fira de Barcelona
Av. Reina Maria Cristina, s/n
08004 Barcelona
Tel. 93 233 20 00
prensa@firabarcelona.com
Previous
Next