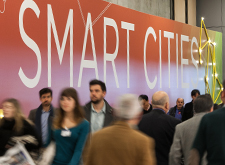 With two months to go before the fourth edition of the Smart City Expo World Congress, the leading international summit on smart cities, 56 mayors from major cities in Asia, Africa, Europe, North America and South America have already confirmed their presence in Barcelona. The municipal chiefs will be attending the event to present their latest projects and seek new solutions for their cities. The Smart City Expo World Congress 2014 will be held this November at Fira de Barcelona’s Gran Via Exhibition Centre.

The Smart City Expo World Congress will play host to delegations from over 400 of the world’s cities, many of them at the very highest administrative level. Some of the more than 50 mayors who have already confirmed their attendance are those from Amsterdam (Netherlands), Bangkok (Thailand), Copenhagen (Denmark), Guangzhou and Beijing (China), Kyoto (Japan), Johannesburg (South Africa), Moscow and St. Petersburg (Russia), Riyadh (Saudi Arabia), Tel-Aviv (Israel), Vienna (Austria) and Jakarta (Indonesia).

Ugo Valenti, the director of the Smart City Expo World Congress, is confident that “the names and figures that we already have confirmed as of today’s date point to the 2014 edition being the best-ever Smart City Expo World Congress. The calibre of the delegates is extremely high and the number of cities attending even further underlines this as the premier global event for smart urban solutions and technologies.” He concluded: “The Barcelona event is an absolute must for any city expecting to tackle the challenges of the immediate future.”

Transformational innovations and ideas
The Smart City Expo World Congress programme features some of the most innovative speakers on the current urban and technological scene. Structured around six main themes (Smart Society, Technology, Governance, Energy, Mobility and Sustainable City), the congress’s 300 speakers include Parag Khanna, regarded as the world’s leading geopolitical analyst and a former adviser to US President, Barack Obama; architects Kengo Kuma and Deyan Sudjic, who will be discussing the creative process within urban environments; futurologist and sustainability expert Alex Steffen; Janette Sadik, an expert in urban mobility and New York’s former Transportation Commissioner; and Vaclav Smil, a scientist specializing in energy and demographic analysis.

The fourth edition of the Smart City Expo World Congress, the only international event on smart cities, which brings together over 400 world cities, 300 speakers and the leading institutions and experts in charge of leading change and urban transformation, will be held between 18 and 20 November at Fira de Barcelona’s Gran Via Exhibition Centre. The event provides the strategies and tools necessary to drive forward knowledge sharing, the development of associations and the creation of business opportunities in the new market of urban solutions and technologies.