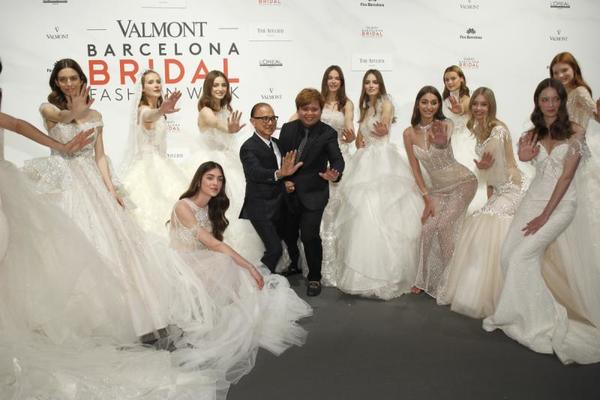 Fashion, art, creativity, design and beauty will once again be reflected in the 2021 bridal wear collections, the true protagonists of the next edition of Valmont Barcelona Bridal Fashion Week, the world’s leading event in its speciality which, more than three months before it is held, has already allocated 90% of the space planned for its trade fair. Thus, with the presence of major brands from around the world that will participate in the event, VBBFW will once again place Barcelona at the centre of the world’s attention in an edition that will value not only fashion, but its impact on a multicultural market that is committed to integration, diversity and sustainability as the keys to development.

VBBFW, organised by Fira de Barcelona, will celebrate its 30th anniversary between 20th and 26th April 2020 at Fira de Barcelona’s Plaza de España fairground with offers from large firms and young designers from all over the world. In addition to the parade, which will feature the fashion shows of more than 30 brands, it is worth noting more than three months before the event, the trade fair has already allocated 90% of the planned surface area. Thus, the organisation expects to surpass the figures of VBBFW 2019 which had more than 430 firms, 74% international from 34 countries, and more than 23,000 visitors, mostly entrepreneurs, retailers and distributors, from a hundred countries.

Rosa Clará will take part in the trade fair and will present the 2021 collection at the VBBFW parade with a special fashion show that will also be the main framework for the celebration of its 25th anniversary.

Pronovias Group strengthens its presence at VBBFW
Pronovias Group has announced that it will strengthen its presence in VBBFW with the participation of three of its brands: White One will present its collection created by the American designer, Zac Posen; St.Patrick will parade with its 2021 collection of the brand’s new designer, Riccardo Serravalle, and Pronovias will show its collaboration with a renowned fashion firm. On the other hand, the Atelier Pronovias fashion Show, held in recent years within the framework of VBBFW, will take place in March 2020.

The parade will host the fashion shows during the first days of the event, and from 24th to 26th the trade fair that will connect exhibitors with buyers will be held, promoting business and networking internationally.