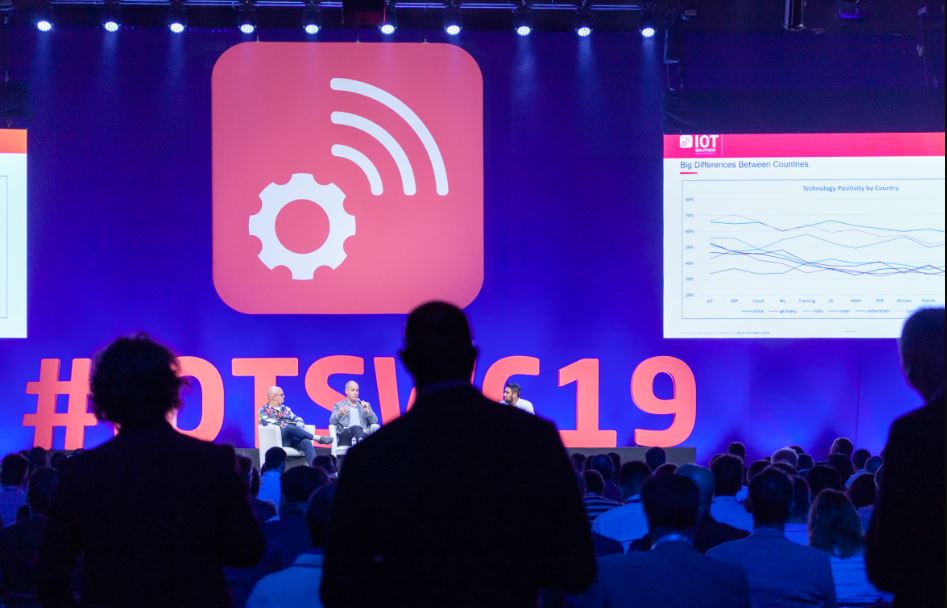 The fifth edition of IOT Solutions World Congress (IOTSWC) draws to a close with high-quality sales contacts and focus on real-world case studies. The 16,000 visitors, who attended the event, organised by Fira de Barcelona in collaboration with the Industrial Internet Consortium (IIC), have witnessed the maturity of the Internet of Things, a key technology in digital transformation and learned from fellow users during three days of the Congress.  IoT Solutions World Congress 2019 was co-located with Blockchain Solutions World (BSW) and AI & Cognitive Systems Forums (AI & CS), showcasing new solutions, processes and services to seize the full potential and value of data across many industries.

On 2019 IOTSWC brought together 350 exhibitors, including leading companies in the development and implementation of IoT solutions such as Microsoft, SAS, Vodafone, Nutanix, Deloitte, T-Systems, Libelium, Kaspersky, Orange, Siemens, Fiware, Hitachi, Relayr, Thingstream, Zyfra, Emnify, Linux Edge Foundation, Hewlett Packard Enterprise and ARM. This international technological benchmark event exhibited real solutions already being successfully deployed in a range of industry sectors with the aim of raising awareness of the possibilities and benefits of IoT from proven experiences.

The director of IOTSWC, Roger Bou, stressed that the event has been reaffirmed as “the great international showcase of digital transformation, one that brings together the world’s top companies and experts to help all types of industries decide their future investments to successfully drive whatever stage of this industrial revolution they are in”.

In the same vein, the executive director of the IIC and chairman of the IOTSWC Advisory Committee, Dr. Richard M. Soley, stressed that “beyond the technologies that have been added to the Internet of industrial things such as artificial intelligence, machine learning, blockchain or augmented reality, what was important for the thousands of attendees has been to learn about the results of real experiences that were presented at the event. For Soley, “IOTSWC showed once again that it is the best place to get inspiring ideas and useful professional contacts to build roadmaps for each company’s digital transformation and also to challenge and pose questions to learn collaboratively.

This year the congress programme, with more than 200 sessions, saw participation from some 300 speakers who presented success stories of IoT applications in different industries, such as energy and utilities, connected transport, construction infrastructure, and healthcare. In addition, IOTSWC has incorporated the Blockchain Solutions World, and the AI & Cognitive Systems Forum, two events designed to address how blockchain and artificial intelligence enhance and reinvent the capabilities of IoT and at the same time to discuss the challenges presented in terms of security and privacy when processing huge amounts of data, and connecting machines. Both events remained standing-room only throughout the Congress.

Among the stand-out names this year is the American consultant Joe Barkai, with his particular perspective of how the world will be dominated by artificial intelligence in 10 years, as well as important managers of both large technology firms and developers of IoT solutions, plus user companies, such as Hugo Boss CIO Erkut Ekinci; McLaren Technology Group COO Jonathan Neale, and executives of Airbus, Sanitas, Carrefour Group, Daimler Motors, Ibercaja, Roca, SNCF Réseau, Maersk GTD, and Brussels Airport.

Following in last year’s wake, IOTSWC increased sessions focused on analysing women’s leadership in the IoT ecosystem and discussing why it is crucial to attract and support diversity and inclusion. An afternoon of sessions was held to discuss this important topic, with keynotes by Equity, Inclusion and Diversity Leader Sally Saba and Women in the Boardroom CEO Sheila Ronning.

One of the most highly valued spaces by attendees was the Testbeds area, where a dozen prototypes and IoT-based projects developed collaboratively by different leading companies were exhibited. This year one could see a self-driving electric car equipped with a cybersecurity system to block attacks; a solution to check gas distribution networks, reducing energy loss and preventing fraud; a platform that combines IoT, artificial intelligence and 5G to provide predictive medical care and respond to emergencies of the elderly or chronically ill; a system to inspect and repair wind farm turbines using drones, artificial intelligence and the cloud; a system based on “digital twins”, which precisely guides the steps of the work to be carried out on the Mars expedition; an application for farmers to know the status of their fields in real time and facilitate decision making; software based on artificial intelligence for submersible pumps used in oil wells; drones, sensors and blockchain that monitors the water quality of the Volga River; and an application that measures driving habits in real time to update the cost of an insurance policy.

Specifically, this last solution developed by GFT was recognised as the best testbed of the event at the IoT Solutions Awards 2019, which also recognised a bionic glove that prevents muscle pain from the French firm Eiffage, in partnership with Bioservo Technologies; a smart and automated mine from Zyfra for SUEK and software that adds AI to any IoT device created by the French companies Cartesiam.ai and éolane.

Also, within the new area IoT Solutions.Font, the winning startup of the competition to access a Startup Accelerator Connector acceleration programme was the American firm Wiliot that has developed a label with processing power and sensors that require no battery (it uses the energy of environmental radio frequencies such as Bluetooth, mobile phone network or Wi-Fi), with an unlimited service life and much cheaper than traditional beacon devices. This label converts everyday products such as clothing or packaging into smart products.

IoT Solutions World Congress, together with the Blockchain Solutions World (BSW) and AI & Cognitive Systems Forums (AI & CS), form part of Barcelona Industry Week, a trade fair platform that held seven events related to the digital transformation of the industry simultaneously, from 29th to 31st October in Fira Barcelona’s Gran Via venue. Industry From Needs to Solutions, MAX, Barcelona Cybersecurity Congress and the Ayri11 automation and robotics congress were also part of Barcelona Industry Week, which together attracted 25,000 visitors.

The sixth edition of IOTSWC is scheduled to be held at Fira Barcelona’s Gran Via venue from 27th to 29th October 2020.