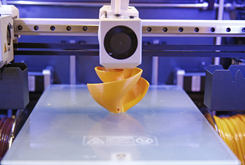 On 17 and 18 June, the Italian pavilion at Fira de Barcelona’s Montjuïc venue is hosting the first Barcelona Maker Faire, an event that brings together end users of 3D printers, including inventors, creators, engineers and designers, who shape the so-called maker movement, the ecosystem born out of additive and advanced manufacturing all over the world. Organized by Sonar+D, IAAC Fab Lab Barcelona and Soko Tech, the first Barcelona Maker Faire has the support of IN(3D)USTRY From Needs to Solutions, Barcelona City Council, ‘La Caixa’ Foundation and the magazine Make:
Created in 2006 in San Francisco as a project of the publishers of the American magazine Make: specialized in 3D technology, this event, which is being held for the first time in Barcelona, aims to show the advantages of additive and advanced manufacturing in fields such as education, society and economics.
Open to the general public, the Barcelona Maker Faire, in the framework of the Sonar festival, will bring together members of the maker community from all over the world so they can share their experiences and projects conceived using technologies such as 3D printers.
The support of IN(3D)USTRY From Needs to Solutions, the Fira de Barcelona show which will take place for the second time from 3 to 5 October at the Gran Via venue, in the organization of the first Barcelona Maker Faire responds, according to its director Miquel Serrano, to the fact that ‘at Fira we are committed to fostering the use of additive and advanced manufacturing in both the industrial field and among end users’.
Serrano adds that ‘in addition, at IN(3D)USTRY From Needs to Solutions we seek to contribute to the creation of a community of users, which is why in the first show, held in 2016, we had an area devoted to the maker movement’. The director of IN(3D)USTRY From Needs to Solutions points out that ‘creators, designers and technology are an important part of the IN(3D)USTRY community and the essence of the maker movement’.
With the aim of bringing additive and advanced manufacturing closer to all industrial sectors, the next IN(3D)USTRY From Needs to Solutions will take place as part of Barcelona Industry Week, formed by Expoquimia, dedicated to the chemical industry; Eurosurfas, the surface treatment show; Equiplast, an event for the plastics sector, and the IoT Solutions World Congress on the industrial internet.
Barcelona, 14 June 2017
Communication Area
Fira de Barcelona
Av. Reina Maria Cristina, s/n
08004 Barcelona
Tel. 93 233 20 00
prensa@firabarcelona.com
Previous
Next