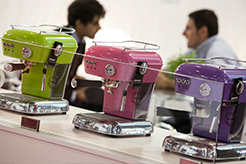 Fira hosts Hostelco, the Gastronomic Forum and BarForum simultaneously for the first time

Hostelco closed its seventeenth edition this afternoon, and the first Barcelona Hosting Week (BHW), which were held at the same time as the Gastronomic Forum and BarForum, with good sensations from visitors and exhibitors alike. The show has consolidated itself as the international platform for products, knowledge and networking, at the service of a sector that seems to be showing the first signs of recovery in terms of innovations and new business formulas.

For Jordi Roure, the president of Hostelco and the Spanish Federation of Hospitality and Catering Equipment Manufacturers (FELAC), “Hostelco 2014 has shown that the sector is in good health; over the last four days we have had the chance to witness at first-hand how our sector is showing undeniable signs of recovery. Moreover, this first edition of Barcelona Hosting Week has proved to be a really good idea and has even further increased the appeal of one of the most important trade events in Europe.“

At an edition that focused on consolidating its international nature, the launch of new sectors and the creation of new business opportunities, such as those related to new technologies for the hospitality sector, Isabel Piñol, the event’s director, underlined the fact that “our exhibitors were very pleased with the overall activity of the event and told us that the more international profile of visitors, the number of contacts they made and the deals closed during the show are proof of the sector’s revitalization.”

The 2014 edition of Hostelco and Barcelona Hosting Week showcased the offerings of 518 companies from 33 countries, representing over 1,200 brands. This vast array was enhanced by the high calibre of the show’s visitors, with more than 600 major buyers, half of whom were international, selected from among the trade professionals and executives with the greatest purchasing potential. Although the definitive visitor numbers have yet to be totted up, it is estimated that some 57,000 trade professionals visited the first BHW, 15% of them international, from over 100 different countries.

Hostelco, organized by Fira de Barcelona with the collaboration of the Spanish Federation of Hospitality and Catering Equipment Manufacturers (FELAC), will be back at the Gran Vía Exhibition Centre in 2016 for the eighteenth edition of the event.