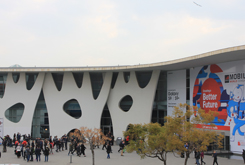 The Mobile World Congress (MWC) 2018, the most important event in the world of the mobile communications industry, which held this week at Fira de Barcelona’s Gran Via venue, attracted 107,000 visitors from 205 countries and territories, including more than 7,700 CEO’s.
MWC 2018, with 2,400 exhibitors, has presented the latest innovations and developments in mobile technology, devices and services. It also has had an outstanding congress programme to analyse tendencies in the fields of mobile technology, artificial intelligence, the digital consumer and the fourth industrial revolution.
The Mobile World Congress, organised by the GSMA in collaboration with Fira de Barcelona, foresees it has an economic impact on the city and its surroundings of 471 million euros, and it has generated 13,000 temporary jobs.
Coinciding with the MWC, the second edition of the Youth Mobile Festival (YoMo) also were held, promoting the GSMA and the Mobile World Capital, 4 Years From Now (4YFN), dedicated to entrepreneurship in mobile technologies, and YoMo.
Barcelona, March 2018
Communication Area
Fira de Barcelona
Av. Reina Maria Cristina, s/n
08004 Barcelona
Tel. 93 233 20 00
prensa@firabarcelona.com
Previous
Next