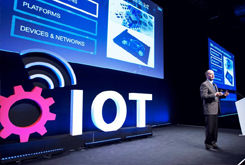 The Factory of the future, Artificial intelligence, and Security in industrial cloud hosting among the key topics

The new edition of the Internet of Things Solutions World Congress (IoTSWC) will gather once again the world’s leading industrial internet experts in Fira de Barcelona in October. During three days companies such as ABB, Accenture, Bosch, Dassault, Deloitte, GE, Intel, IBM, Microsoft, MIT, Red Hat, Schneider and Vodafone will showcase their latest solutions and breakthroughs in Internet of Things (IoT) field while over 200 speakers will analyze through a six-themed conference program how the industrial internet is radically transforming industry as we know it.

Among the topics discussed within the nearly 100 sessions scheduled feature Industrial Internet and Industrie 4.0 – Combining the best of two worlds; The factory of the future, Repair intelligence, and Security in industrial cloud hosting; The Internet of Energy; Innovative applications of Artificial Intelligence in automotive maintenance, Lab-In-A-Box: A Diagnostic Device for the Internet of You; and Big Data solutions for decreasing traffic fatalities. The Industrial Internet Consortium, the sector’s leading association, has advised once more Fira de Barcelona in the design of the conference program. IoTSWC will also include an exhibition area that will feature not only companies and their latest innovations but also a testbeds area with real-life applications of these solutions.