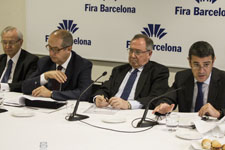 Supporting international investment with projects in Qatar and Japan, among others

Fira de Barcelona expects to close 2013 with revenues of over 117 million Euros, substantially more than the estimated amount. The capacity to innovate, maintain shows despite the difficult climate and, above all, attract large international events that have taken place in the venues are some of the factors that are behind these good results. In this way, the institution has strengthened its role as economic driver and its position as a benchmark in Europe.

Fira’s evolution and prospects were explained by the President of the Governing Board, Josep Lluís Bonet, and the CEO, Agustín Cordón, during the institution’s General Board meeting, chaired by the Mayor of Barcelona, Xavier Trias.

Trias gave a positive assessment of this year’s activity, reflected in over 60 shows and congresses, and highlighted “the importance of holding large international events that boost economic activity, promote synergies with the local business fabric and reinforce the Barcelona brand”.

The estimated 117.2 million-Euro turnover is 10.9% higher than the forecast amount, 1.7% more than in 2012 and 2.2% higher than in 2011 (a comparable year in terms of trade fairs).  The forecast EBITDA is 9.6 million Euros and sustains the costs derived from integrating Alimentaria Exhibitions. Discounting this effect, the comparable EBITDA is similar to that of the two previous years (2012 and 2011), which was 11 million.
Large international events

The President of Fira de Barcelona’s Governing Board, Josep Lluís Bonet, explained that these “satisfactory results”, encompassed in the current complex climate, are fruit of the institution’s strategy deployed some years ago and reinforced in times of crisis, based “on strengthening its own shows ¿with importance given to trade visitors- innovation, diversification of activity ¿above all in services and catering- and holding important international events”.

In this sense, the CEO, Agustín Cordón, pointed out “that the efficient combination of all these actions has yielded revenues significantly higher than those initially forecast”. He also emphasised the relevant medical and technological events that have taken place this year in Fira’s exhibition centres, in accordance with the institution’s strategy, that is cementing its leadership in Spain and its well-known position on the European trade fair scene.

“In 2014, we will continue along these lines, committed to attracting large international events, reinforcing Fira’s role as a platform for commercial exchange and know-how, and supporting the business fabric”, said Cordón after valuing the induced impact of that the institution’s activity generates in the economy of Barcelona and is surroundings.

Committed to innovation and technology
In 2013, the institution has hosted 62 shows and congresses, as well as 70 corporate, commercial and sports events, held mainly in the Montjuïc and Gran Via Exhibition Centres. During the shows held in Fira, over 450 activities have been organised. The list of important events that have been held includes Mobile World Congress (MWC), EIBTM, Smart City Expo, Motor Show, MIhealth and Construmat, among others. Making their debut were Pharmaprocess, forum on industrial processes in the pharmaceutical sector, and EVS27, the largest global congress on the electric vehicle. The next edition of EVS will be held in South Korea in 2015.

Highlights among the large medical events have been the congresses of the European Neurology and Respiratory Societies and the congress of the European Association for the Study of Diabetes, in addition to national events on Primary Care and Neonatology. With regard to top technological events, the institution has hosted VM World (cloud computing), SAP, Microsoft Convergence and the global corporate congress HP Discover, which attracted over 11,000 professionals. This year, all these events have brought together over 100,000 highly-qualified attendees.

Motor Show in Qatar and Smart City in Kyoto
In accordance with the international business development strategy, more and more Fira shows are finding a space in other countries and international events in order to increase the options of our companies abroad. In this sense, shows such as Piscina Moscow and Piscina Saõ Paulo and, for the first time, Smart City Bogotá and Alimentaria Brazil, have been held. Fira has also been present in non-trade show and congress events in Shanghai, Montreal and Kazakhstan, among others.

Next year, the institution will take new steps abroad in important events, such as participation in the organisation of the Motor and Jewellery shows in Qatar, which will be held in February, and of Smart City in Kyoto, in March, as well as Piscina Moscow and Construmat- Ficons in Recife (Brazil), in addition to other projects different countries in the pipeline.

Fira estimates it will generate revenues of 120.5 million Euros in 2014, when it expects to organise around 55 shows and events, such as Alimentaria, Mobile World Congress, Smart City Expo, Hostelco, Expoquímia and Passenger Terminal Expo, among others. Some of the new proposals for next year are Handmade Festival, dedicated to various aspects of manual creativity, and Denim by Première Vision, an event that is leaving Paris and moving to the Catalan capital.

It will also continue to host important technological and medical events, such as EWEA (Europe’s Premier Wind Energy Event), ELA (European Lab Automation) and the European Cardiology Congress, which will attract 30,000 attendees, from the health field among others. Other planned events are MPowered Industries, 4YFN, organised by Mobile World Capital Barcelona (MWCB) and targeting entrepreneurs, SAP and VM World.