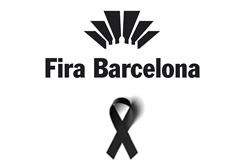 Plane crash in the French Alps

Fira de Barcelona would like to express its sincere thanks for all the messages of support and solidarity it has received from friends, colleagues, companies and institutions on the loss of two of its staff who were travelling for professional reasons on the Germanwings flight that crashed yesterday in the French Alps.

Fira de Barcelona deeply mourns the irreplaceable loss of Anna Cantos and Víctor Pascual and would like to convey its heartfelt condolences to their families, colleagues and friends, as well as those of the other victims of this tragedy, who also included the father of one of our staff.
Barcelona, 25 March 2015
Communication Area
Fira de Barcelona
Av. Reina Maria Cristina, s/n
08004 Barcelona
Tel. 93 233 20 00
prensa@firabarcelona.com
Previous
Next