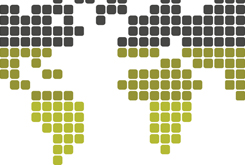 International commemoration to highlight the importance of the trade fair industry

For the second year running, Fira de Barcelona is joining in the celebration of Global Exhibitions Day, #GED17, today. This initiative, instigated by the Global Association of the Exhibition Industry (UFI) with the support of the Spanish Trade Fair Association (AFE), aims to highlight the importance of the global trade fair industry and its considerable economic and social impact in the regions where these kinds of events are held.
Now in its second edition, the Global Exhibitions Day 2017 enjoys the participation of trade fair organisations from 45 countries, including Fira de Barcelona, as well as 40 sector associations. With the slogan ‘Think Global, Act Local’, the event is putting a particular emphasis this year on the positive impact of trade fair activities on employment, the social fabric, the private sector, innovation and local investment. The UFI estimates that 50% of the expenditure generated at trade fairs directly benefits the regions in which they are held, and the other half has an impact on the trade fair industry itself, creating and maintaining hundreds of thousands of jobs.
This is corroborated by the figures. Some 31,000 trade fairs are held around the world every year. The sector, which generates 680,000 direct jobs and 1.8 million indirect ones, posts annual revenue of 98,000 million euros and accounts for over 260 million visitors and 4.4 million exhibitors, according to the UFI’s figures.
According to the general manager of Fira de Barcelona, Constantí Serrallonga, ‘there is absolutely no doubt about the role that trade fairs play in the region’s economic and social development, generating jobs and wealth in different areas such as hotels, transport, restaurants, retail, etc. Trade fairs have been, are and will continue to be one of the best instruments for promoting and growing business; places where business deals are closed, new contacts are made, knowledge is shared, trends and innovations are presented, and steps are taken towards internationalisation. They bring together manufacturers, buyers, consumers and the general public… and the fact is that although we are immersed in the digital era, there is nothing to beat personal contact.’.
Fira de Barcelona is the longest-standing trade fair venue in Spain and a benchmark in its sector in Europe. Every year it hosts 120 events, including trade shows, congresses and corporate events, bringing together some 30,000 direct and represented exhibitors and welcoming over 2 million visitors from 200 countries. Fira de Barcelona generates an annual economic impact of over 2,600 million euros and more than 40,000 jobs, as well as having an important social value, according to a study produced by ESADE Business School.
Barcelona, 6 June 2017
Communication Area
Fira de Barcelona
Av. Reina Maria Cristina, s/n
08004 Barcelona
Tel. 93 233 20 00
prensa@firabarcelona.com
Previous
Next