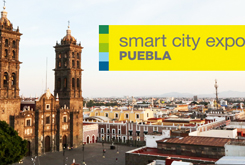 Fira de Barcelona has reached an agreement with local company Mercados Mexicanos to create Fira Barcelona Mexico in order to organise events in Mexico. Over the coming years, the new company will be organising trade shows and forums in a number of cities, with an emphasis on Smart Cities, energy and education.
The shareholding is held equally by the trade fair institution’s subsidiary, Fira Barcelona Internacional, and Mercados Mexicanos, an organisation that specialises in working with the Mexican administration to develop and implement smart project in the country’s cities.
Indeed, Smart Cities will be the main focus of attention of the initial events to be managed by Fira Barcelona Mexico. Within the framework of the international Smart City Expo World Congress events held in various cities around the world as well as annually at Fira de Barcelona’s Gran Via exhibition centre, the Smart City Expo Latam event will be held in Puebla next June. Now in its second edition, the event expects to exceed the 80 exhibitors, 150 speakers, 500 represented cities and 7,800 visitors of last year’s edition to become the benchmark event of its kind in Latin America in the promotion of smart, sustainable cities in the region.
In addition, during this same year the plan is to organise various Smart City Forums (one-day congresses) in the cities of Veracruz and Aguas Calientes, which will be extended in the coming years with the collaboration of the National Federation of Municipalities of Mexico.
With a view to 2018, the company is working on launching other trade fairs in Mexico in areas such as education and energy.
According to the international business director of Fira de Barcelona, Ricard Zapatero, ‘the start-up of this company strengthens our international strategy and activities with the introduction of new events and projects in Mexico as part of our objective to contribute to generating more opportunities and opening up new markets to the exhibitors and trade professionals who attend our shows.’
In this respect, the constitution of the new company forms part of Fira de Barcelona’s strategy to boost its presence overseas with the organisation of Smart City Expo events in cities such as Puebla, as mentioned earlier, Buenos Aires, Casablanca and Kyoto; as well as the motor show in Doha and the joint management of the Doha Convention Centre in Qatar. It is also worth mentioning its activities in Cuba where, alongside local partner Pabexpo, it is organising various events this year related to the graphic and packaging industry, hospitality, renewable energies and security, as well as several consultancy projects in other countries around the world.
Barcelona, 24 April 2017
Communication Area
Fira de Barcelona
Av. Reina Maria Cristina, s/n
08004 Barcelona
Tel. 93 233 20 00
prensa@firabarcelona.com
Previous
Next