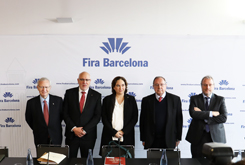 Fira de Barcelona forecasts revenues of 165 million euros in 2016, the most successful year in its history