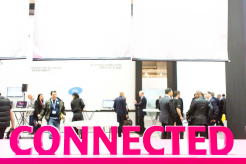 New app functionality will enhance the Congress experience for attendees

In order to enable the connection and communication of thousands of mobiles, tablets, computers and gadgets that will be active during the GSMA Mobile World Congress (MWC), Fira de Barcelona has deployed, in the Gran Via venue with an exhibition floor space of over 240,000 m2(gross), 1,200 Wi-Fi access points, one of the world’s most powerful networks installed in an exhibition centre. This will give cover to over 75,000 delegates expected to visit the event between February 24th and 27th.

In an international event, in which mobile phones and high technology are the main attraction, cover and Wi-Fi connection are fundamental. Edition after edition, Fira de Barcelona has improved connectivity of its exhibition centre in order to cover the high Internet demand required, achieving for this congress one of the best in the world in a trade fair facility. With over 1,200 access points, 14 kilometres of fibre optics and 52 kilometres of internet cable, all 240,000 m2 of exhibition floor space in the Gran Via venue will be covered. This massive cable and Wi-Fi network will have a capacity of 10,000 Mbps (5,000 upload and 5,000 download).

In this way, MWC 2014 will not only have the biggest Wi-Fi cover installed in this event, but also one of the biggest in an exhibition centre. Fira’s installation surpasses other large facilities, such as international airports, large sports stadia and leading global convention centres, among others.

Mobile World Congress App
Also, the GSMA is introducing new functionality in its GSMA mobile app, designed specifically for the congress, to facilitate the activity of attendees during the event. Fira de Barcelona has collaborated in the development of some of the app’s functions. The list of possibilities includes an information system about available transport modes (Metro/Trains, Taxis and Shuttles), with waiting times and geo-localised routes to get to the various departure points.

Another function allows you to purchase and order food in advance from different catering outlets in the exhibition centre, whereby you save time and skip queues. It also has an electronic NFC badge and an application that allows you to exchange information about professional contacts from mobile to mobile and track the data, very useful for conducting business during the congress. Moreover, the app offers up-to-date information about the conference schedule, speakers and exhibitors.