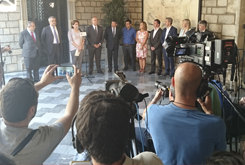 Fira de Barcelona expresses its satisfaction following the GSMA’s announcement to extend Barcelona’s status as the Mobile World Capital until 2023. The decision extends the current link to the city for five more years, from 2019 to 2023 and, consequently, the celebration of the Mobile World Congress in its exhibition facilities and the possibility to develop a number Capital initiatives beyond 2018, which was when the current contract expired.

The president of Fira de Barcelona, Josep Lluís Bonet, stresses that this represents “great news for the city and the country as a whole in that the joint impact of being Mobile World Capital and hosting the Congress is exceptional from both an economic and social perspective”. He added that the decision also confirms “the positive direction of the Mobile World Capital, the contribution of the Fira in the success of the event and the work being done by the official bodies and companies involved”, after the news was made public by the GSMA this morning.

For Agustí Cordón, vice-president of Mobile World Capital Barcelona and Managing Director of the Fira “the commitment to Barcelona is an endorsement of the hard work by all concerned and recognizes the efforts put in by the mobile world capital to foster digital transformation and directly affect people’s quality of life. The GSMA’s commitment is without doubt an acknowledgement but at the same time a challenge that allows us to push forward with new initiatives“.

The MWCB is an initiative destined to transform the city into a reference point for mobile and digital technologies as well as improving its citizens’ quality of life. With support from public and private institutions, MWCB is using mobile technologies to transform economic sectors and essential areas such as education, healthcare and lifestyle by means of four programmes: Entrepreneurship and Innovation, mSchools, mHealth and Smart Living. Apart from holding the Mobile World Congress, MWCB is also promoting the Mobile World Centre and 4 Years From Now (4YFN), an event held parallel to the Congress aimed at bringing together startups in the mobile sector.

Following the success of the last edition of the Congress, which registered record figures at virtually all levels, Barcelona’s city partners –the Ministry of Industry, Energy and Tourism; Government of Catalonia; Barcelona City Council, Fira de Barcelona, Barcelona Tourism and MWCB– decided, last March, to take the initiative and present an offer to the GSMA to renew the city’s status as Mobile World Capital and host of the Mobile World Congress until 2023.

After a decade in Barcelona, the Mobile World Congress has experienced significant growth, going from just over 50,000 attendees and 960 participating companies in 2006 to 2,000 companies and more than 94,000 visitors from all over the world who registered for the latest edition at the beginning of March this year at the Gran Via and Montjuïc Exhibition Centres. From the arrival of the event in 2006, the economic impact generated has exceeded 3,000 million euros and temporary employment for 75,000 people according to a study commissioned by the GSMA itself.