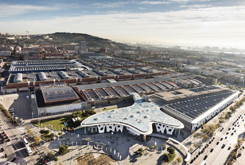 Fira de Barcelona, with the goal of updating and improving the services and facilities of one of the most modern fair venues in Europe, has deployed a network of temperature and humidity sensors throughout the Gran Via venue that can be monitored in real time to optimize the comfort of both exhibitors and visitors. Thus, Fira becomes a pioneer in furnishing an entire exhibition center in Spain with IoT technology and connectivity.

The real-time connectivity system deployed by Cellnex Telecom, the telecom service and infrastructure operator, will provide the eight pavilions of the Gran Via venue, including the meeting rooms and auditoriums, with 100 sensors and a data transmission system to control them via Fira de Barcelona’s new Internet of Things platform.

Fira will thus be able to constantly control the air quality and temperature level in each of the areas and modify them remotely. The platform is also capable of optimizing the energy consumption linked to the air conditioning. This measure forms part of Fira’s undertaking to apply the Smart Building concept to its premises, in order to make them more efficient and to obtain high-quality information enabling it to offer the very best services to its users.

The Gran Via venue, with a gross exhibition area covering 240,000 m2, is one of the most modern in Europe. It is characterized by its design and functionality and its commitment to sustainability, as it houses one of the largest rooftop photovoltaic power station. Its eight pavilions, connected by a walkway channelling the movement of visitors, boast highly advanced technical and logistical features.

The site hosts important events each year, mostly of a professional and industrial nature, including the Mobile World Congress, Alimentaria, Smart City Expo World Congress, IoT Solutions World Congress and Hispack, among many others. In 2019 it is scheduled to host ITMA, the world’s largest textile industry event, which is set to occupy all the pavilions.

Cellnex IoT network
Since 2015 Cellnex has had the first network geared at IoT (the Internet of Things) serving the whole Spanish territory, with national coverage totalling 95% of the population. More than two million devices are already connected and they use the Cellnex IoT network in Spain on a daily basis, providing services for the remote monitoring of light consumption, water telemetry, waste management, material tracking, smart parking, safety and energy efficiency, risk prevention in social housing, among others.

Cellnex Telecom is the leading independent operator of wireless telecommunications infrastructures in Europe, with a total portfolio of 28,000 locations, including the deployments planned until 2022. Cellnex carries out its activities in Spain, Italy, Holland, France, Switzerland and the United Kingdom.

About Fira de Barcelona
Fira de Barcelona is the leading trade fair organization in the Spanish market and one of the most important in Europe, especially for professional and industrial fairs. Each year more than 140 fairs, congresses and corporate events are held at its Gran Via and Montjuïc venues, bringing together more than 30,000 companies and 2.5 million visitors from 200 countries. The institution has around 400,000 gross m2 of exhibition space, one of the largest areas in Europe, divided between its Montjüic and Gran Via sites. Its contribution to the economy of the city and the surrounding area is estimated at 2.5 billion euros a year.