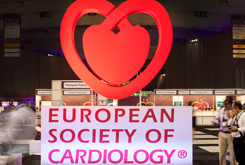 Bringing together some 30,000 specialists from 140 countries in the Gran Via venue

ESC17, the biggest cardiology congress in the world

The European Society of Cardiology has once again chosen Fira de Barcelona to host its annual event, the ESC Congress, one of the world’s most important medical meetings. Between 26 and 30 August it brings together some 30,000 specialists from 140 countries.
Over the five-day event, more than 500 scientific sessions will take place, involving over 1,500 speakers from 74 countries, 69 of them Spanish cardiologists. In addition, more than 4,500 papers will be presented, chosen from around 10,800 submissions.
There will also be an exhibition area to showcase the latest products and advances in surgery, imaging techniques and IT resources.
The congress, whose slogan this year is ‘Innovation in Cardiology’, is commemorating the fortieth anniversary of the first percutaneous coronary intervention (PCI), an operation that had ‘a tremendous impact and opened up a field that has improved every aspect of cardiovascular treatment’, explained the president of the congress committee, professor Stephan Achenbach.
Fira de Barcelona has previously hosted four editions of the European Cardiology Congress: in 1992, 1999, 2009 and 2014, as well as the World Cardiology Congress in 2006.
The organisation of the new edition of this important event is part of the institution’s strategic plan to attract large international congresses in the fields of medicine and technology.
Barcelona, August 2017
Communication Area
Fira de Barcelona
Av. Reina Maria Cristina, s/n
08004 Barcelona
Tel. 93 233 20 00
prensa@firabarcelona.com
Previous
Next