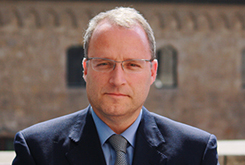 The Board of Directors of Fira de Barcelona today unanimously approved Constantí Serrallonga’s appointment as the institution’s new General Manager. Serrallonga, who takes up his new post on 9 December, has extensive management experience in both the public and private sectors, where he has held various senior positions.

The new General Manager of Fira de Barcelona is 50 years old and has a degree in Economic Sciences from the University of Barcelona (UB) as well as further qualifications in health economics and the management of healthcare services (UB), the Executive Development Program (PDD) and Advanced Management Program at IESE, and the International Finance Program at ESADE.

Between 1989 and 2002 he worked at the General Hospital of Manresa in various senior management positions, including Managing Director between January 1998 and September 2002, at which point he joined Transports Metropolitans de Barcelona (TMB) as Chief Executive in charge of bus and metro services for Barcelona and its metropolitan area. In 2008 he was appointed Chief Executive of Grupo Ágora – Invest – Tradisa, the international logistics operator, and three years later, in June 2011, he was appointed Municipal Manager of Barcelona City Council, a position he held until June 2015.

Amongst other functions, he has been a member of the Board of Directors of Fira 2000, the holding company responsible for managing the construction and financing of the Gran Via Exhibition Centre; the Executive Committee of the Mobile World Capital Barcelona Foundation (MWCB) and the Advisory Committee of Foment del Treball. He has also held other positions at entities involved primarily in healthcare and transport.

The president of the Board of Directors of Fira de Barcelona, Josep Lluís Bonet, is confident that “thanks to his professional profile and personal attributes, Serrallonga will very successfully steer a new era full of challenges and opportunities in the increasingly global and competitive market in which Fira plays an active role, as well as being a major economic driving force for the country.”

Meanwhile, Serrallonga noted that “it is both a matter of great pride and also a big challenge to head up an institution with the prestige, economic importance and significance of Fira de Barcelona, which has such a tremendous team of staff. I’m taking on this new responsibility with huge enthusiasm and the goal of providing continuity to a strategy that has made it an international benchmark in terms of both the exhibitions it organizes and the major events it attracts to its venues, as well as its growing activity abroad.”

Serrallonga takes over from Agustín Cordón who, after eleven years as General Manager, recently left the post to embark on a new professional venture.